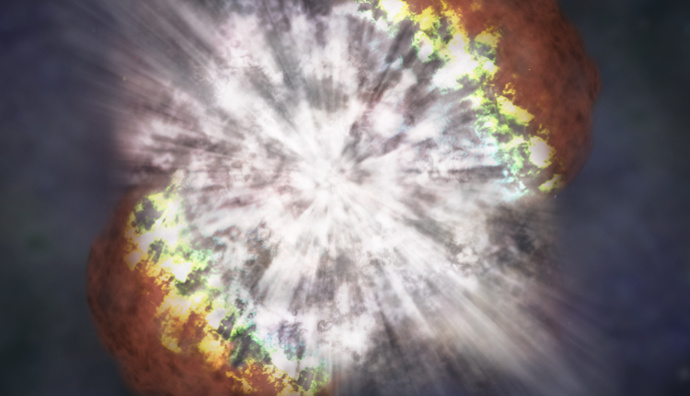 Supernovae such as Gaia16apd are the spectacular explosions which mark the end of a stars life (Image credit: NASA).

On May 16, the Gaia satellite spotted a bright object in the sky, which was designated Gaia16apd.  The last time Gaia observed this region of space, on April 5, nothing was seen. Gaia16apd was a transient which only appeared in the last month!

A few nights later, a team of astronomers using the Nordic Optical Telescope on La Palma obtained a spectrum of Gaia16apd. A spectrum splits light into the colours of the rainbow, and acts as a fingerprint that can be used to identify a transient. The spectrum of Gaia16apd revealed that it was a supernova - an exploding star.

Images taken as part of the Sloan Digital Sky Survey some years ago showed a faint galaxy at the position of Gaia16apd. This galaxy was the home to the star which exploded, and we can measure its distance by seeing how its light is redshifted.

Using the distance to Gaia16apd and its host galaxy, the team worked out how bright the supernova was. Amazingly, it was much brighter than the typical supernovae that are seen in other galaxies. In fact, it was over 25 times brighter than normal, making it a member of the rare class of "superluminous supernovae".

One possibility is that Gaia16apd is powered by a highly magnetised ball of iron, weighing more than the mass of the Sun, and spinning around one thousand times a second. Such an exotic object, termed a "magnetar" could be formed in the explosion that blasted Gaia16apd apart.

Already, astronomers have pointed a range of telescopes across the globe at Gaia16apd to see just how bright it becomes. And in space, NASA's Swift telescope has begun to observe Gaia16apd at ultraviolet and x-ray wavelengths. Even more excitingly, Gaia16apd is bright enough (magnitude ~17) that it can be observed by many amateur astronomers for the next few weeks.

You can read more about the first scientific results on Gaia16apd at the following links: