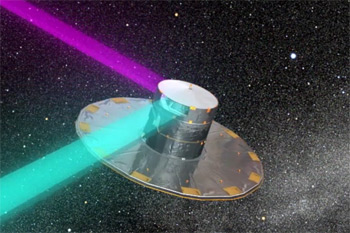 In its lonely orbit, 1.5 million km from Earth, Gaia is spinning. As it turns, rotating once every 6 hours, the viewports of Gaia’s two telescopes sweep across the sky.

Unlike ground-based telescopes, Gaia does not track a part of the sky to take a steady image. Gaia is always moving and stars are constantly moving through its two fields of view. Gaia’s mission is a series of glimpses of all the stars, not a detailed study of a few.

As stars pass through the fields of view of the telescopes, their images track across five groups of digital detectors. First, the Sky Mapper  detects the star, approximates its brightness and sets up the following detectors. Next, 9 strips of detectors in the Astrometric Field measure accurately the star’s brightness in white light and its position.  The star’s image then passes over the Red and Blue Photometers, where the brightness in red and blue light is measured and low-resolution spectra are recorded. Last comes the Radial Velocity Spectrograph, which measures the star’s speed in the line of sight. This set of measurements, of one star in one telescope during one revolution, is called a field of view transit, or just a “transit” for short.  A whole transit takes about a minute and each detector sees the star for only a few seconds.

Gaia's focal plane. The image of an object moves across the focal plane (on this diagram, from left to right) as Gaia scans the sky. View larger image (325 KB). (Image courtesy of ESA - A. D. Short.)

A star is seen twice in each revolution of Gaia, once with each of Gaia’s telescopes. When the star comes round again in the next revolution, Gaia’s spin-axis has moved (this smooth movement of the axis, called precession, is part of the mission design and is how Gaia gets to see the whole sky instead of just one strip);  and the star is no longer in the field of view. Gaia will see the star again after a few weeks. So it goes for the whole mission: Gaia records two transits for each star a few weeks apart. These samples of the star’s brightness build up into a light curve (a graph of brightness against time) from which we may detect unexpected and interesting events on the star.

Gaia talks to Earth three times per day, connecting for a total of about 8 hours per day. While waiting for its next contact with Earth, Gaia stores the images from its detectors in its internal memory. Both the memory and the bandwidth for sending the images to Earth are limited, so Gaia reads from the detectors only the small “windows” of pixels around the track of each star.

The stream of information (“telemetry”) from Gaia, including the science data from the detector windows is beamed to one of the antennae in ESA’s Estrack tracking-network) and then collected by the Mission Operations Centre (MOC); this is in ESA’s Space Operations Centre (ESOC) at Darmstadt. A few hours have passed since the observations. 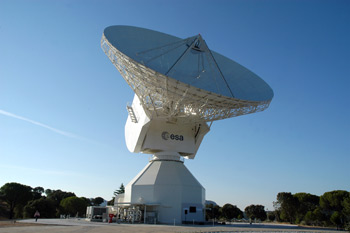 MOC separates the science data from the flight-control telemetry and sends them on immediately to ESA’s Science Operations Centre (SOC), in the Space Astronomy Centre (ESAC) at Villafranca, near Madrid.

The information received from MOC is organized for ease of transmission from Gaia to the ground. The science data from observations of a star are scattered amongst many telemetry packets. SOC’s first job is to rearrange the data and to store them in a way that makes scientific sense, as a few records of the Gaia Main Database for each transit.