Skip to main content
Home » Alerts » What and why » What is Gaia?

Gaia in a nutshell 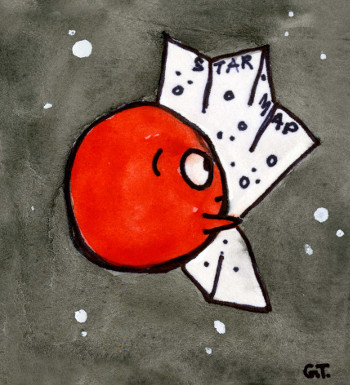 The main purpose of Gaia is to give us a 3D map of our Galaxy, the Milky Way. Image credit: Grace Treanor.

Orbit: 1.5 million km from the Earth in an orbit around a point (called the second Lagrange point, L2) where gravity of the Earth and the Sun balance (see also: Lauch and orbit).

Objectives: To create an extremely accurate 3D map of around one billion stars.

In orbit, Gaia scans the sky, spinning around its axis. The fields of view of its two telescopes move across the sky. Gaia completes a full revolution every 6 hours. This allows Gaia to cover the entire sky every six months. Each star will be "seen" by Gaia, on average, 80 times during the 5-year lifetime of the mission.

We understand the history and the present structure of our Milky Way Galaxy using its fossils – the stars. The chemical elements in a star are the fossil record of its time of formation. The orbit of a star is the fossil record of assembly of the Milky Way itself and the distribution of the mysterious Dark Matter which holds the Milky Way together. Gaia will create an accurate 3 dimensional map of the positions - and motions - of one billion stars in the Milky Way and determine their chemical compositions.

We can do lots of other exciting things with a billion precise measurements: 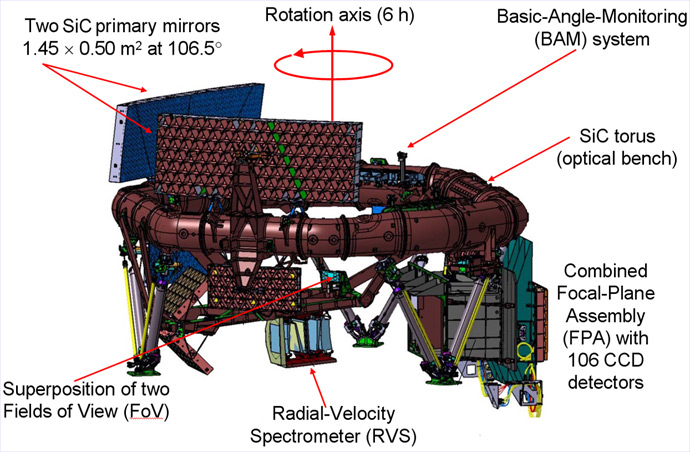 Gaia's payload. The mirrors of the two telescopes and the instruments mounted on optical bench. The telescopes scan the sky as the satellite rotates around its axis, completing a full revolution every 6 hours. View larger image (250 KB). (Image courtesy of EADS Astrium.)