Skip to main content
Home » Alerts » What and why » Why are we looking? » Cataclysmic variables 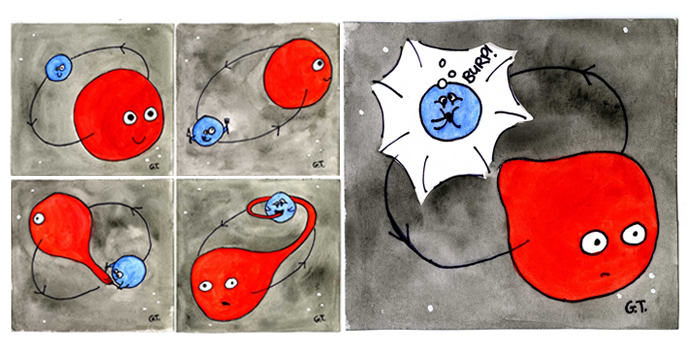 The general picture of a CV sees two stars orbiting each other in a binary system (top left). If the stars orbit sufficiently close, one of the stars can start to pull material from its companion (top right, bottom left). This will lead to the formation of an accretion disk (bottom right), and ultimately, a bright transient when the accreted material on the star gaining matter ignites (right). Image credit: Grace Treanor.

What is a cataclysmic variable?

Stars like to socialise. While our own Sun is isolated, most other stars live in binary systems. Within a binary, two stars orbit each other. If the stars in a binary are close together, one can pull matter off the surface of the other through the influence of its gravity. When one of the stars is a white dwarf  (the incredibly dense remnant left behind after a normal star has burnt through its nuclear fuel), the binary is known as a Cataclysmic Variable, or CV (see Variable Stars for a brief overview of CVs).

There are several distinct types of CV, distinguished by their type of optical variability. The most dramatic type of variability seen in CVs is in the form of transient events or outbursts which repeat from time to time in these systems. These outbursts reflect underlying physical processes.

Novae (originally called "stellae novae" or "new stars"), are a type of CV that displays spectacularly bright outbursts. Nova outbursts are seen to repeat in some systems only. In others only one event has ever been observed. In a nova-type CV, matter passing through the accretion disc will build up on the surface of the white dwarf and the pressure will eventually reach a level at which thermonuclear fusion is ignited. The material from the companion star (mostly hydrogen but sometimes helium) that has built up on the surface of the white dwarf burns up in this fusion reaction. The nova brightens dramatically in an optical outburst that can last for months before the CV fades back to its original brightness.

Dwarf nova outbursts are not as bright as novae but they occur more frequently. Dwarf nova-type CVs display semi-regular outbursts lasting from only a few hours to weeks and these outbursts repeat on timescales of days to years.

In dwarf novae, the observed outbursts are believed to be connected to the accretion disc and the rate at which material passes through it. Either the rate of mass being transferred from the companion star increases, or the disc itself somehow becomes unstable - in either case, it is thought that a lot of material is dumped from the disc onto the white dwarf at once. The material becomes very hot as it falls onto the white dwarf, causing a sudden brightening or outburst. Many of the details of this process are still being figured out, and gaining a better understanding of this is an active area of current research! 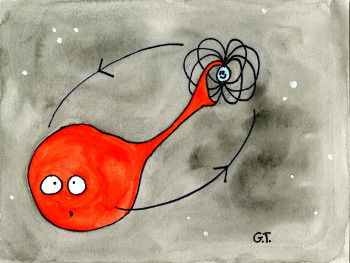 "Polars" are a special type of cataclysmic variable where material is funnelled by magnetic fields onto a white dwarf. Image credit: Grace Treanor.

In extreme cases, a CV can produce a thermonuclear (or Type Ia) supernova. This is the brightest type of optical transient event that can arise from a CV and it can happen if the white dwarf becomes too massive to remain stable. (A white dwarf has a maximum stable mass that is known as the Chandrasekhar mass). The white dwarf can become massive enough to explode as a thermonuclear supernova by ongoing accretion of material from its companion star through the disc. Another way is if its companion is another white dwarf and the two spiral in so close that they actually merge. The resulting supernova blast destroys the white dwarf (or merged white dwarfs) and consequently, the CV itself.

In addition to outbursts or transient events, CVs are well known for their variability on a variety of timescales. Because CVs are compact systems, they have relatively short orbital periods (the time it takes for the stars to complete one orbit) of a day or less. The shortest orbital periods of all are seen in the ultracompact AM Canum Venaticorum (AM CVn) systems: in these rare CVs the stars whizz around each other in as little as five minutes! If the CV is aligned so that we view it at an angle rather than face-on, we can often see a modulation in the light output from the system (seen in the light curve) as the companion star passes in front of part of the disc or white dwarf. There is a better chance of seeing a modulation like this in shorter-period, more compact systems, such as AM CVns. Other variability observed in CVs includes low-level flickering (from the accretion disc) and a modulation in the light curve at the spin frequency of the white dwarf (commonly seen in magnetic CVs). 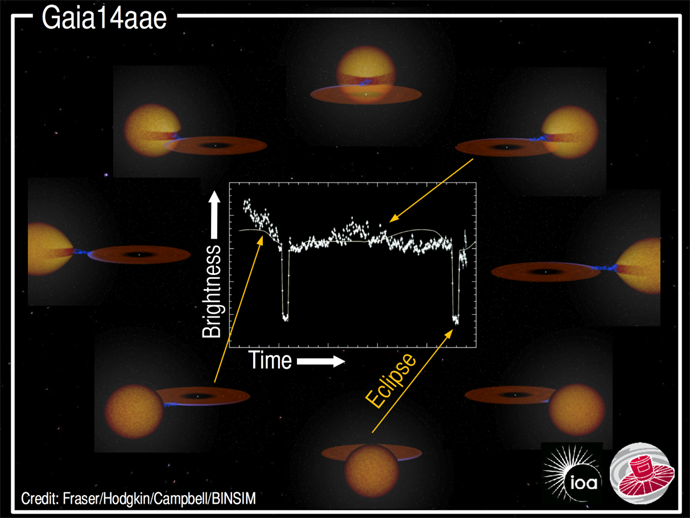 One of the first discoveries from Gaia was an outburst from a CV system named Gaia14aae. Gaia spotted Gaia14aae when it became ten times brighter in the middle of 2014. Using a telescope with a  spectrograph which split the optical light from Gaia14aae into different colours (similar to a prism), astronomers found that Gaia14aae was made up mainly of helium, with no evidence of hydrogen. This was an exciting result indicating an unusual system, since most stars are composed mainly of hydrogen. Not only was helium abundant in the system, but the evidence pointed to an accretion disc made of helium. (The orbital motion of an accretion disc can be seen with a spectrograph due to the Doppler effect). An accretion disc combined with outbursts points to a CV. Based on the change in brightness and duration observed for the outburst seen from Gaia14aae in 2014, it was clearly a dwarf nova outburst. The helium suggests that the companion star which was losing material in the binary must have already lost its outer shell which is comprised mostly of hydrogen, and exposed its deeper helium core. A crucial factor leading to the identification of Gaia14aae as an AM CVn-type CV was the presence of eclipses in the light curve, a fact first discovered by amateur astronomers. It was found to be the first totally eclipsing AM CVn ever discovered, observed at an almost edge-on angle where the companion star passes in front of the disc and white dwarf, completely blocking the light of the white dwarf for a brief time during each orbit. And the orbital period is less than 50 minutes!

It was lucky to get such an exciting, rare discovery from Gaia so early on, but Gaia is continuing to find many more types of CV as it surveys the sky (and, who knows, may find some other unusual ones too). All Gaia’s CV discoveries will lie within our own Galaxy and Gaia’s results will reveal a lot about the population of CVs in the Milky Way. Studying them can help shed light on how stars in binaries evolve, and can be used to test and improve computer models of stellar evolution. And even more excitingly, binary systems such as Gaia14aae are expected to produce gravitational waves, which experiments such as LIGO can detect.