Skip to main content
Home » Alerts » What and why » Why are we looking? » Transients in the future

Transients in the future 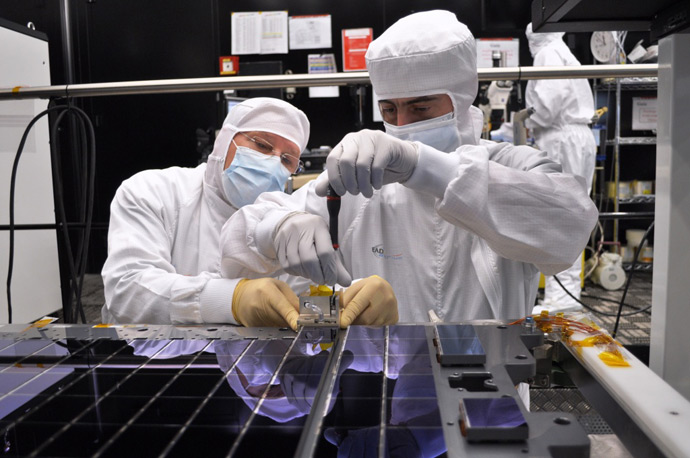 The Gaia camera being assembled before launch from 106 separate CCDs in Toulouse in France. Large CCDs such as this make the current and next generation of survey telescopes possible. Image credit: Astrium/Airbus Defence and Space/ESA.

Gaia is one of the first generation of new surveys that are systematically observing the night sky. In the past, astronomers would write an application to obtain time on a telescope to try and address a specific scientific problem. If awarded time, they would travel to the telescope, observe for a few nights, and then return home to analyse the images they have obtained. While there is still a role for this type of observing, in many cases survey telescopes can do the same work, but much more efficiently.

Survey telescopes and instruments are not designed or operated to do one job, rather they observe large areas of the sky, and make the data and images they take available to a wide group of astronomers. These astronomers can then use these same images in many different ways – for example someone may be looking for binary stars, somebody else may be studying how galaxies cluster together in groups, while another astronomer looks for any stars that have been dimmed by planets that pass in front of them. Gaia is an excellent example of this – as some scientists look at the data to measure distances to nearby stars, others are trying to find supernovae outside our own galaxy!

Survey telescopes, and in particular survey telescopes that are repeatedly observing the sky to find transients, have been made possible in the last decade by developments in camera and computer technology. The cameras used to capture visible light in astronomy are similar to those found in smartphones. At their heart is a sensor called a "charge-coupled device" or CCD. While the CCD in a smartphone is the size of your thumbnail, the CCDs used on telescopes can be much larger. The camera on board Gaia is  made up of 106 CCDs and is about one meter wide (read more about Gaia’s camera)!  Along with CCDs, powerful computers are needed to process all the images taken by telescopes such as Gaia – and, as Gaia’s camera has about a billion pixels, even storing all the data taken is a challenge.

Future telescopes such as the Large Synoptic Survey Telescope (LSST) are now being built that will complement Gaia. For example, LSST does not have the exceptionally sharp resolution that Gaia has, but is able to see much fainter objects. Together with Gaia, these new telescopes will help us map out the Universe in unprecedented detail. But the most exciting thing to look forward to, are the discoveries that Gaia and other telescopes will make that are completely unexpected!