Skip to main content
Home » Alerts » What and why » Why are we looking? » Supernovae 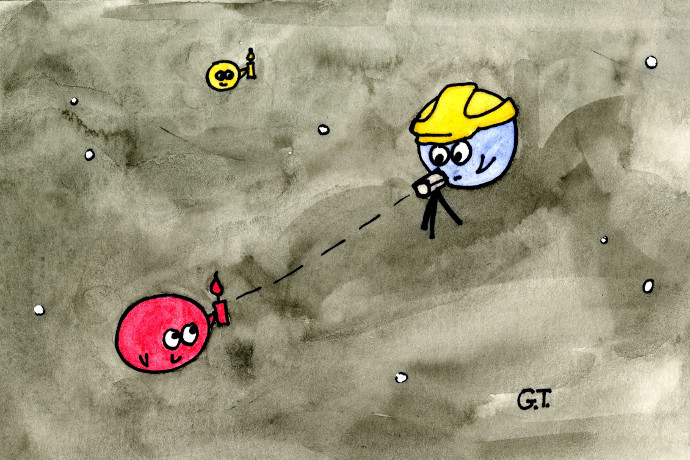 Thermonuclear supernovae can be used as "standard candles" to measure distances in the Universe. Image credit: Grace Treanor.

While stars burn for a very long time, they don't live for ever. At the end of some stars' lives, they will explode and produce a bright transient which astronomers call a supernova. Supernovae (rather than "supernovas") are extremely bright, and at their brightest can outshine the light from the billions of other stars in a galaxy combined. Because they are so bright, it is possible for Gaia to see supernovae in other galaxies beyond our own Milky Way. In fact, the light from the most distant supernova ever seen had to travel for over 10 billion years to reach us. 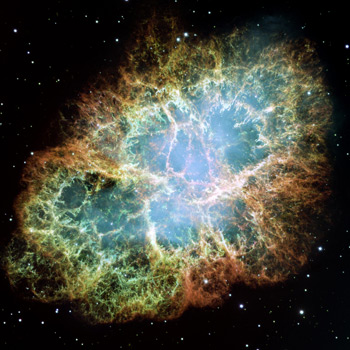 This image from the Hubble Space Telescope shows the "Crab Nebula", the remains of a supernova that exploded in our own galaxy nearly a thousand years ago. The supernova was bright enough to be observed with the naked eye when it exploded. Today, the supernova can be seen as an expanding cloud of gas, containing many heavy elements such as iron which were produced in the explosion. Image credit: NASA, ESA, J. Hester, A. Loll (ASU).

Core-collapse supernovae mark the death of a star that was more than about eight times the mass of the Sun. Massive stars like this are rare, but have an important role in our Universe, as they produce a lot of the heavy elements that make up planets, and even people! Throughout a star's life, it shines because it is generating energy through nuclear fusion. During fusion, light elements such as hydrogen and helium are smashed together in the centre of the star to make heavier elements such as carbon and oxygen. When that star explodes as a core-collapse supernova, it blasts these heavy elements back into the galaxy, where they can go on to be recycled into other stars and planets.

Core-collapse supernovae explode because the star has used up all its nuclear "fuel" of light elements. Because the stars that explode as core-collapse supernovae are very massive, they burn through their fuel very rapidly in only a few tens of millions of years. After they run out of fuel, these stars can no longer generate the energy they need to support themselves against gravity. They begin to collapse in on themselves (hence the name, "core-collapse"), which releases a lot of energy. This energy is what then causes the star to explode as a very bright supernova.

The second type of supernovae, thermonuclear, occurs thanks to a very different process. Thermonuclear supernovae (also known as "Type Ia" supernovae) come from less massive stars that are in a binary system. A "binary" is a pair of stars orbiting around each other. In some cases when the stars in this binary are close together, the gravity of one star can pull material from the surface of the other. If this material falls onto the first star, it will slowly cause it to become heavier. If the star in a binary is a particular type called a white dwarf, and it gains enough material from its companion, it can reach a point where it explodes as a supernova.

Gaia will find large numbers of both core-collapse and thermonuclear supernovae. If you want to help observe some of these supernovae, click here. Finally, if the thought of stars exploding has caused you to worry about what will happen to our own Sun, then you can relax! Our Sun is the wrong type of star to explode as a supernova (it is not massive enough to explode as a core-collapse, and doesn't have the binary companion necessary for a thermonuclear supernova), and will happily last for another few billion years ...