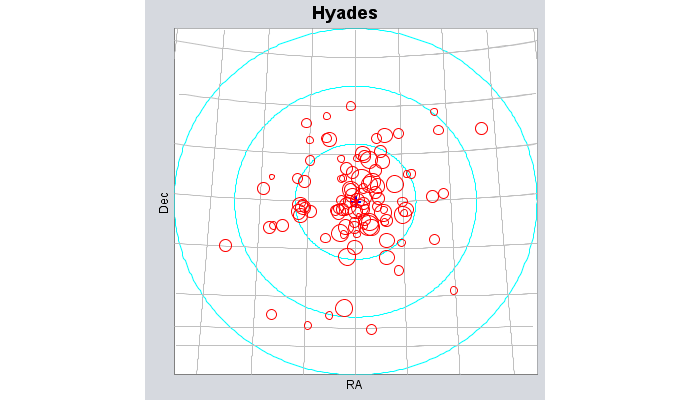 A map of the Hyades members as identified from the Gaia DR1 Tycho-Gaia Astrometric Solution (TGAS) catalogue. The coordinate grid is at 5 degrees intervals, the three concentric circles are at 5, 10 and 15 pc from the cluster centre at the cluster distance. View larger image. (Image credit: F. van Leeuwen.)

"Gaia’s first major data release is both a wonderful achievement in its own right, and a taster of the truly dramatic advances to come in future years. Several UK teams have leading roles in Gaia’s Data Processing and Analysis efforts, which convert the huge raw data streams from the satellite into the beautiful science-ready information now made available for the global scientific and public communities. UK industry made critical contributions to the Gaia spacecraft. The UK public, including school students, as well as scientists, are sharing the excitement of this first ever Galactic census" said Prof Gerry Gilmore, the UK Principal Investigator for Gaia.

Gaia’s UK data processing involvement includes groups in Cambridge – which also hosts the major data processing computing centre DPCI, and leads the project-wide effort to discover new transient sources, Edinburgh, MSSL/UCL London, Leicester, Rutherford Appleton Lab, and Bristol. The team in Cambridge, led by Floor van Leeuwen, Dafydd Wyn Evans and Francesca De Angeli, took care of the data processing of the flux information, providing the calibrated magnitudes of around 1.6 billion stars, 1.1 billion of which are now published as part of the first data release. In the process, the Cambridge team also check the daily photometric data for unexpected large outliers, which led to the regular publication of photometric science alerts, ready for immediate follow-up observations from the ground. The team in Edinburgh, led by Michael Davidson and Nigel Hambly, worked on key aspects of the data pre-processing and satellite health checks, in collaboration with teams in Barcelona and Madrid.

Gaia photometric data processing lead Dr. Floor van Leeuwen said: "The sheer volume of data processed for this first release is beyond imagination: around 120 billion images were analysed, and most of these more than once, as all the processing is iterative. Many problems had to be overcome, and a few small ones are still left. Calibrations have not yet reached their full potential. Nevertheless, we are already reaching accuracies that are significantly better than expected before the mission, and which can challenge most ground-based photometric data in accuracy."

The Gaia team in the UK also played a crucial role in the preparations for the data release, with the team in Edinburgh having worked on the data base from which the data can be extracted, and the team in Cambridge coordinated the beta testing of the data base access and the on-line documentation for the release.

Dr. Dafydd Wyn Evans said: "This first Gaia data release has been an important exercise for the Gaia data reduction teams, getting them to focus on deliverable products and their description. But it is only the first small step towards much more substantial results". For the UK teams the future means providing improvements in the pre-processing of the data and extending the processing to cover the photometric Blue and Red prism data. Also data from the radial velocity spectrometer, with major involvement from MSSL, will be included in future releases. The photometric science alerts will continue to operate throughout the mission, and summaries of the results will be included in future releases. DPCI manager Dr. Francesca De Angeli said "Despite the considerable amount of data, the first Gaia data release provides just a foretaste of the accuracy and completeness of the final catalogue."

This Gaia data release marks the first chance astronomers and the public have had to get their hands on the most detailed map ever made of the sky. But Gaia has already been producing scientific results over the past two years in the form of Gaia Alerts (see Alerts section of this website for how you could take part).

Dr. Simon Hodgin, lead of the Cambridge Alerts team said "The Gaia Alerts project takes advantage of the fact that the Gaia satellite scans each part of the sky repeatedly throughout the mission. By comparing successive observations of the same patch of sky, scientists can search for "transients" – astronomical objects which brighten, fade, change or move. These transients are then announced to the world each day as "Gaia Alerts" for both professional and amateur astronomers to observe with telescopes from the ground."

Gaia has discovered many supernovae, the brilliant explosions of stars at the end of their lives. Many of these have been "Type Ia" supernovae, which can be used to measure the accelerating expansion of the Universe. But among these apparently typical supernovae there have been some rarer events. Gaia16ada was spotted by Gaia in the nearby galaxy NGC4559, and appears to be an eruption of a very massive, unstable star. The Hubble Space Telescope observed this galaxy some years ago, allowing astronomers to pinpoint the precise star which erupted.

Another lucky catch for Gaia was the discovery of Gaia16apd – a supernova which is nearly a hundred times brighter than normal. Astronomers still don't know what the missing ingredient in these ultra-bright supernovae is, and candidates include exotic rapidly spinning neutron stars, or jets from a black hole. Cambridge astronomer Dr. Morgan Fraser is trying to understand these events, saying "We have only found a handful of these exceptionally bright supernovae, compared to thousands of normal supernovae. For Gaia to spot one so nearby is a fantastic result."

Many of the Gaia Alerts found so far are bright enough to be observable with a small telescope. Amateur astronomers have taken images of supernovae found by Gaia, while school children have used robotic telescopes including the Faulkes Telescopes in Australia and Hawaii to do real science with transients. At the DR1 press relase students at Eastbury Community School will be doing real follow-up science analysis – contributing alongside the scientists, while the Institute for Research in Schools, led by Dr Becky Parker, will be rolling this out to hundreds of schools across the country so they can contribute to the billion star search.

Dr Hodgkin said: "Since the announcement of the first transients discovered with Gaia in September 2014, over one thousand alerts have been released. With Gaia continually relaying new observations to ground, and our team working on finding transients continually improving their software, the discoveries look set to continue well into the future!"

The Cambridge Gaia team intends to release a dedicated smartphone app, which will allow anyone worldwide to follow the Gaia Alerts discoveries as they happen. Real spacecraft data will be available to the world as soon as it is processed, with users able to follow the discoveries and see what they are. Information to access the app will be published on this website.

The Gaia data processing teams in the UK have been and are being supported by the UK: Space Agency and the STFC.

Further information on the Gaia mission, and the announcements of Gaia science Alerts can be found on this website.

For email addresses and telephone numbers see the Institute of Astronomy website.

Gaia Data Release 1 UK Science Workshops. The UK Gaia project is organising a series of one day workshops open to interested astronomers in the UK. These will provide a basic introduction to the Gaia mission, an overview of the catalogue contents including scientific quality and practical information on how to handle and access them from the Gaia archive for science research.

GDR1 World of Physics article. Download the aritcle by Gerry Gilmore and Floor van Leeuwen, "A billion pixels, a billion stars" (PDF, 5 MB), to be published in September 2016 issue of Physics World.