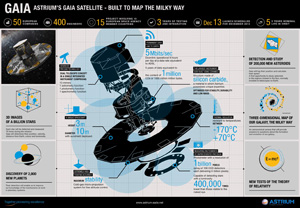 A poster presenting the main scientific goals and the key facts about the mission and the spacecraft. Courtesy of Astrium. Available as an image in JPG format (640 KB).

Description of the poster

The poster consists of three horizontal sections: top section, the main section, divided into three columns, and the footer.

The top section contains the title and a list of mission statistics, which include the following information:

The two narrow side columns of the main section contain a photograph of the spacecraft and list the following five mission goals:

3D images of a billion stars: Each star will be detected and measured 70 times during the mission. Gaia will determine their position, velocity, distance from Earth, colour and luminosity

Discovery of 2,000 new planets: Their detection will enable us to improve our knowledge of the mechanisms at work in planetary systems.

Detection and study of 200,000 new asteroids: Gaia will log their position and calculate their speed. A first opportunity to study asteroids in the regions closest to the Sun, normally invisible to telescopes on Earth.

Three-dimensional map of our galaxy, the Milky Way: An astronomical census that will provide answers to questions about the formation and evolution of our galaxy.

New tests of the theory of relativity.

The centre column of the main section contains the diagram of the spacecraft and the following information about the satellite.

5 Mbits/sec downlink operational 8 hours per day at a data rate equivalent to ADSL.

5 years of data equivalent to the content of 1 million CDs or 1000 million million bytes.

Structure made of silicon carbide, a material in which Astrium possesses unique expertise.

Photometer with a resolution of 1 billion pixels (array of 106 CCD detectors each delivering 9 million pixels).

Capable of detecting stars with a luminosity 400,000 times lower than those visible to the naked eye.