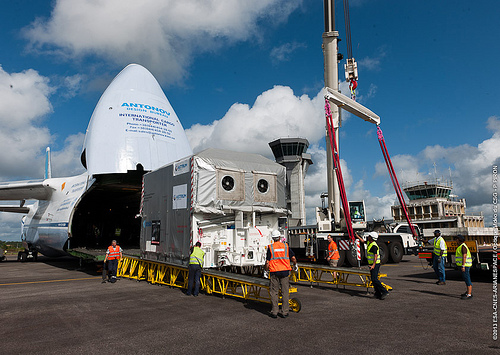 Update: Gaia was successfully launched, as planned, on 19 December 2013 at 09:12:19 UTC, and has reached the L2 point. The sunshield deployment was completed 88 minutes after the launch. On 14 January 2014, following a short thruster burn just after 15:30 UTC (16:30 CET), Gaia reached its operational Lissajous orbit around L2. On 25 July 2014 Gaia started routine operations.

Gaia will be launched on a Soyuz-STB/Fregat-MT launch vehicle from the European Spaceport in Kourou, French Guiana. The launch is planned to take place in December 2013. After separation from Soyuz rocket Gaia will take a month to travel to its final destination on an orbit around the Earth: a Lissajous orbit around the second Lagrange point (L2; see What are Lagrange Points?). Find out more about Gaia's journey to orbit (available from ESA's website). Read about Gaia's launch sequence. Download Arianespace Gaia launch kit. Track Gaia after the launch with Field of View Maker.

Once in its orbit, Gaia will start scanning the sky. As Gaia spins around its axis, fields of view of its two telescopes (why two telescopes?) will move across the sky. Gaia will complete a full revolution every 6 hours. The spin axis of the satellite will be contiually changing its direction ("precess") by following a circle around the direction to the Sun. The radius of this circle is 45 degrees, and Gaia will complete 6.4 circles every year. This is known as Gaia's Nominal Scanning Law - you can find out more about Gaia's scanning law on The scan page. The scanning law will allow Gaia to cover the entire sky every  six months. Each star will be "seen" by Gaia, on average, 80 times during the 5-year lifetime of the mission.