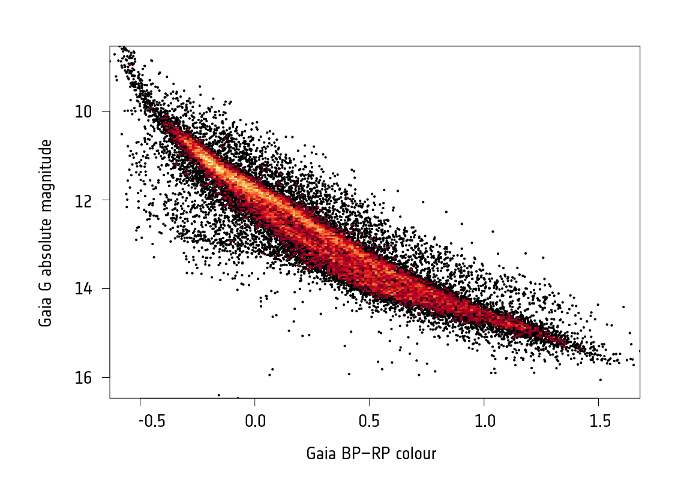 White dwarfs are the dead remnants of stars like our Sun, which release their energy and cool down as time goes by.

In this diagram, named after the astronomers who devised it in the early 20th century, the white dwarfs are plotted according to their colour (on the horizontal axis) and brightness (on the vertical axis). Information about stellar distances is fundamental to calculate the true brightness, or absolute magnitude, of stars.

Brighter stars are shown in the top part of the diagram, while fainter stars are in the lower part. Bluer stars, which have hotter surfaces, are on the left, and redder stars, with cooler surfaces, on the right. The colour scale in this image does not represent the colour of stars but is a representation of how many stars are plotted in each portion of the diagram: black represents lower numbers of stars, while red, orange and yellow correspond to increasingly higher numbers of stars.

While Hipparcos had obtained reliable distance measurements to only a handful of white dwarfs, more than 25 000 such objects are included in this diagram based on Gaia data. This allowed astronomers to see fine structures, such as the two roughly parallel yellow lines within the broader strip, which are likely an imprint of two different types of white dwarfs, those that have hydrogen-rich cores and those that are dominated by helium.