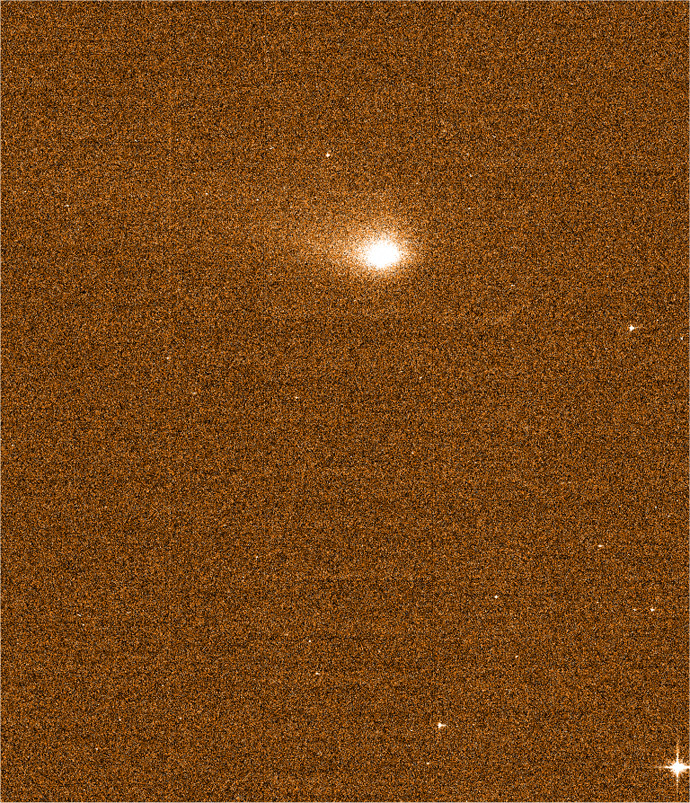 Rosetta comet seen by Gaia. A Gaia image of Comet 67P/Churyumov–Gerasimenko, obtained on 14 September 2015. The image shows the comet’s coma and tail. The nucleus and Rosetta, which was some 300 km from the surface at the time, are both hidden in the innermost pixel. A number of background stars are also sprinkled around the image, which measures about 4.5 arc minutes across – about one-seventh of the Moon’s diameter. Credit: ESA/Gaia/DPAC. Acknowledgement: F. Mignard & P. Tanga, Observatoire de la Côte d’Azur, France.

A local cosmic celebrity was recently pictured among the multitude of stars and Solar System bodies surveyed by ESA’s Gaia satellite: Comet 67P/Churyumov–Gerasimenko, currently accompanied by another ESA spacecraft, Rosetta.

While scanning the sky to map the positions and motions of a billion stars in our Galaxy, Gaia also picks up objects much closer to home, such as asteroids and comets in the Solar System.

With its ability to detect faint and moving objects, Gaia has already identified tens of thousands of asteroids since routine science operations began in July 2014, and these data will be used to determine their orbits to unprecedented accuracy.

Gaia is optimised to detect stars, which appear as point sources in its camera, and measure their properties, but it does not routinely return images of celestial objects. However, a special trick can be used to image a particular object. This is what Gaia astronomers did to ensure that, when the satellite scanned the patch of the sky including Rosetta’s comet, the star-mapper camera would capture an image of this iconic object.

Rosetta’s comet is currently between the orbits of Earth and Mars. It reached its peak brightness between August and September, having passed the closest point to the Sun on its 6.5 year orbit on 13 August. Rosetta has been at the comet since August 2014, studying the surface and environment as they swing around the Sun, and it will continue these investigations until the end of the mission in September 2016.

Meanwhile, closer to Earth, Gaia surveys the entire sky about every three months, and calculations predicted that it would scan the portion of the sky with Rosetta and its comet on 14 September. For this special occasion, the astronomers made sure that Gaia’s star-mapper camera would cover that patch of the sky using a special mode in which a full image is recorded and transmitted to the ground instead of point sources only.

The image shows the comet’s coma and tail. The nucleus and Rosetta, which was some 300 km from the surface at the time, are both hidden in the innermost pixel. A number of background stars are also sprinkled around the image, which measures about 4.5 arcminutes across – about one-seventh of the Moon’s diameter.

While this image of Rosetta’s comet has mainly a symbolic value – an ESA mission, 1.5 million kilometres from Earth, looking at a fellow science mission and its object of study, both located over 260 million kilometres away – scientific data were also collected during this observation.

In fact, besides the special observing mode used to obtain the image, the comet was also caught by the onboard detection software as a ‘suspected moving object’. Over the three-second observation, it appeared to move by some 100 km with respect to the background stars, as seen from a distance of 260 million kilometres.

Over its five-year mission, Gaia will observe hundreds of comets and repeatedly measure their positions to unprecedented accuracy. These data will allow scientists to improve the orbit determination of many comets well beyond the precision that can be achieved with ground-based observations alone. They will also use Gaia’s observations to investigate their composition and surface properties.