Somewhere in the Universe a star is exploding. Astronomers in ancient China called them guest stars: a star which suddenly appeared in the night sky, then faded away to nothing. Today we recognize these guest stars, or transients, as supernovae and novae. In fact the night sky is constantly flickering with transient events, but most of them are too faint to see with the naked eye. The Gaia satellite will provide us with a unique way to discover and measure these transient events across the whole sky for 5 years.

We expect to find 3 new supernovae every day, as well as novae and other kinds of cataclysmic variables at a rate of 4 per week. But there are many other kinds of transient phenomena in the Universe that we are only just beginning to discover. With Gaia we hope to discover transients that we believe come from stars being shredded as they pass close to a supermassive black hole in the centre of a distant Galaxy (Tidal Disruption Events). Or the mysterious outbursts seen in very young stars embedded in a dense stellar nursery (for example the Trapezium cluster in Orion). Not all stars get brighter; some undergo sudden 'dimming' events such as the R Corona Borealis stars, which can become thousands of times fainter in a matter of days. It is believed that they are 'belching' out carbon dust shrouding the star in a dense protective veil.

Perhaps the most exciting prospect is to discover something completely new, something we’ve never seen before, and didn’t expect.

The first Gaia science will be discoveries of these new transient objects – supernovae, novae, extreme variable stars, tidal-disruption events – which will be discovered at the Cambridge processing centre, and immediately made available for study by both professionals and the interested public. Gaia will discover many new sources, which are bright enough for amateurs, and schools with access to public robotic telescopes, to become the first to confirm and obtain more information. Gaia will start producing alerts in the autumn of 2014. 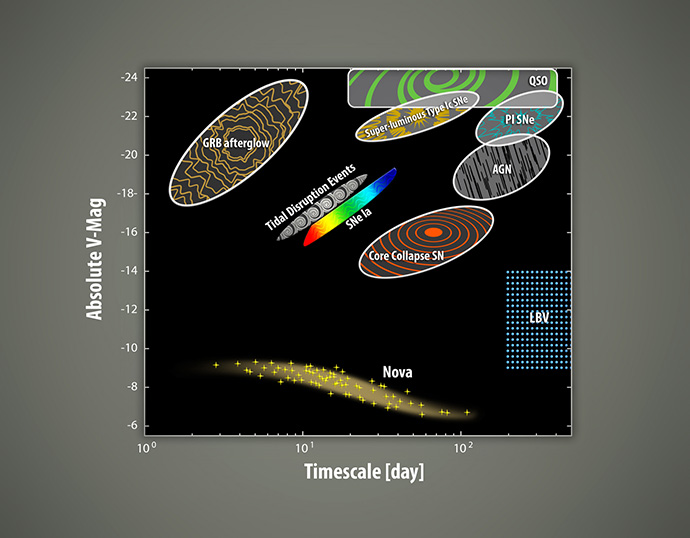 The figure above shows the brightness of a transient event (in magnitudes, smaller is brighter) compared to its duration (in days). The different classes (in increasing brightness) are: novae, luminous blue variables, core-collapse supernovae, type-Ia supernovae, tidal disruption events, active galactic nuclei, super-luminous and pair instability supernovae, gamma-ray burts and quasi stellar objects. In astronomy we tend to discover the most common classes of event first, and there is plenty of space in this figure to find new classes of rare object. (Figure credit: A. Smith, H. Campbell (IoA, Cambridge).)