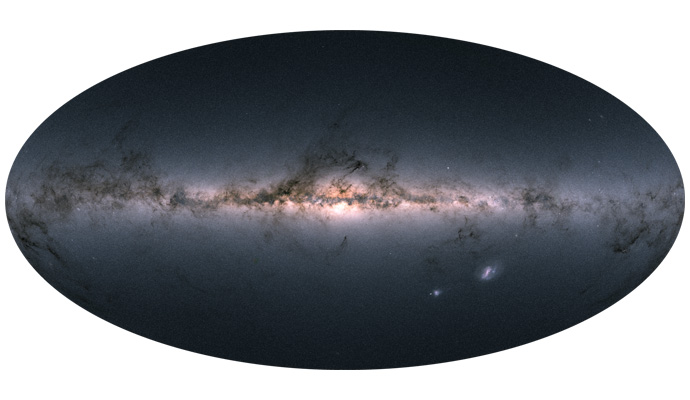 Gaia Data Release 2 sky map in colour. The map is a map of the measured brightness, or flux, of the almost 1.7 billion sources in Gaia DR2. It is a combination of three other maps, separately compiling the fluxes measured in the Gaia G, GBP and GRP photometric bands. These individual maps are built by adding, or integrating, the flux of all sources that fall within each pixel. A logarithmic rescaling is applied to compress the huge range of integrated brightness throughout the sky. The GRP, G and GBP maps are then used as R, G, and B channels respectively, combined and post-processed to create a coloured image. Credits: ESA/Gaia/DPAC, A. Moitinho / A. F. Silva / M. Barros / C. Barata, University of Lisbon, Portugal; H. Savietto, Fork Research, Portugal.

Astronomers today (25 April 2018) opened one of the last remaining windows on the Universe, publishing the first major 3-dimensional census of over one billion stars in our Milky Way.

The Gaia data became available to astronomers - and others - worldwide at noon (CEST) on April 25 2018. The data set contains information on some 1.7 billion stars, quasars, asteroids, and galaxies. Of these precise measures of distance and motion across the sky, brightness and colours are provided for 1.3 billion, radial velocities for 7 million stars, stellar parameters for some 100 million, variability over time for 550,000 stars, and accurate orbital data for 14,000 asteroids.

The European Space Agency Gaia mission has today provided the information for astronomers to map the true 3-dimensional structure of our Milky Way Galaxy, with over one billion stars having their positions and distances published to unprecedented precision. This is some 600 times more stars than previously available, covering a volume 1000 times larger than Gaia's own first data release, with precision some one hundred times improved. These results allow improved study of almost all branches of astronomy: from traces of the formation of the Solar System; through how stars evolve; through the current structure, the assembly and evolutionary history of the Milky Way; to mapping the distribution of Dark Matter in the Galaxy; to establishing the distance scale in the Universe; to discovery of rare objects.

This second data release allows progress in all these studies by providing not only distances and apparent motions across the sky for 1.3 billion sources, but also very precise measurements of brightness and colour for an even larger catalogue of 1.7 billion sources. Seven million stars have their line of sight velocities measured, providing full 6-dimensional - three space positions, 3 space motions - information, determining full orbits for those stars in the Milky Way. This is the information needed to weigh the Galaxy, and determine the distribution - and perhaps the properties - of Dark Matter, the mysterious substance which dominates the mass of the Galaxy and the Universe. 500,000 variable stars are published, allowing detailed precise analyses of how stars evolve and if our current calibration of cosmological distances is robust. 14,000 asteroid orbits are determined 100 times better than previously, testing the families of building blocks of Solar System formation.

A very special aspect of the Gaia mission is that the team of hundreds of engineers and scientists across Europe who have delivered the Gaia spacecraft and its data do not keep the results for their own science interests. The team processes and calibrates the data, and has published several illustrative analyses as tutorials for the community, and to illustrate the remarkable accuracy and volume of the data. Today's release puts the Gaia data on a global level playing field with free access to everyone for analysis and discovery.

"The combination of all these unprecedented measures provides the information for astronomers to take the next big steps in mapping the formation history and evolutions of stars and our Milky Way Galaxy. There is hardly a branch of astrophysics which will not be revolutionised by Gaia data. The global community will advance our understanding of what we see, where it came from, what it is made from, how it is changing. All this is made freely available to everyone, based on the dedicated efforts of hundreds of people. There are so many exciting things to do better with the exquisite Gaia data we anticipate new science papers appearing every day after this release." said Prof Gerry Gilmore, UK Principal Investigator for the UK participation in the Gaia Data Processing and Analysis Consortium, and one of the original proposers of the mission to ESA.

Dr Nicholas Walton, a member of the ESA Gaia Science Team, remarked "The 25th April 2018 and the release of Gaia DR2 marks a key milestone for astronomy, with Gaia truly bringing the Milky Way into brilliant focus. It provides the most exquisite 3-D map of our Galaxy. The Gaia data will be a globally accessible resource for astronomical research for decades to come, enabling the future research of today's young astronomers in the UK, Europe and the World. Gaia is raising excitement and opportunity, bringing the next generation of researchers together to tackle many key questions in our understanding of the Milky Way."

The UK has been a major partner in the Gaia mission since its proposal, with significant involvement in spacecraft design and construction, especially by Airbus Defence and Space (Stevenage), and through provision of the sensors for Gaia's billion-pixel camera, by Teledyne-e2v (Chelmsford). Several UK teams have key roles in processing the data. Cambridge, supported by the UK Space Agency and STFC, hosts one of the six data processing centres with responsibility for the brightness, colour and spectrophotometry (for DR3) data. Dr Francesca De Angeli, head of the Cambridge processing centre, commented "This data release, which contains nearly 2 years of Gaia science data, has proven an exciting challenge to process from spacecraft camera images to science-ready catalogues. We have a dedicated team, a significant computing centre, and now a substantial and complex processing system to handle all the real-world complexity. Scientists in Edinburgh and Leicester work with us in Cambridge, and colleagues across Europe, to develop and test this complex system. We are already busy preparing for the processing that will lead to the next data release in about two years' time. More sophisticated strategies and updated models will be applied to the Gaia data to achieve even more precise and accurate photometric and spectrophotometric information, which will enable even more exciting scientific investigations and results." Dr. Nigel Hambly, an astronomer at the Institute for Astronomy in Edinburgh University contributing calibration algorithms and software, added "It is a privilege to be involved in ESA Gaia. Our local team has been working up to these data releases for ten years or more, and to see the fruits of these labours is wonderful."

Dr Dafydd Wyn Evans leads the work which has successfully calibrated Gaia's brightness measurements to one part in a thousand, by far the highest precision data set of this scale ever produced. "Gaia has so far observed each of its more than 1.7 billion sources on average about 200 times. This very large data set has to have all the changing satellite and sky responses removed, and everything converted on to a well-defined scale of brightness and colour. While a huge challenge, it is worth it. This allows discovery and scientific analysis of variable stars, location of a star's evolutionary status through a Hertzprung-Russell diagram, determination of intrinsic stellar properties, and discovery of large-scale structure in the Milky Way. Our colour and brightness measures need to be exceptionally precise to allow the full information content of Gaia's astrometry to be realised. Happily, they are."

Yet another new aspect of the Gaia data released today are radial velocities derived from Gaia spectra. Gaia releases radial velocities for some 7million stars, many times more than have been measured in the history of astronomy up to now, with vastly more to come in future releases. A team at Mullard Space Science Laboratory/UCL, led by Prof Mark Cropper, has been the UK contribution to the French-led spectroscopic processing effort. "Spectra provide the critical information to complement Gaia's astrometry, providing line of sight (radial, Doppler-shift) velocities and precise measures of stellar chemical element abundances. Gaia measures huge numbers of individually low-signal spectra - nearly 20 billion separate spectra to date - which must be carefully combined to deliver their full value. This demanding process is worth the effort! The remarkable map of the changing average radial velocity as we look around the sky is direct evidence of the rotation of our Galaxy. The details provide very much more detailed science, and will allow many studies of the way disk galaxies and their spiral arms and central bars evolve."

Dr Floor van Leeuwen has been Project Manager for the UK and European photometric processing work, and is a leading co-author on the example science papers illustrating Gaia's impact on our knowledge of star clusters and satellite galaxies in the outer Milky Way. "Groups of dwarf galaxies, including the Magellanic Clouds, can now be observed to be moving around in very similar orbits, hinting at a shared formation history. Similarly, a pair of globular clusters has been observed with very similar orbital characteristics and chemical composition, again pointing towards a shared history of formation. The accurate observed motions and positions of the globular clusters and dwarf galaxies provide tracers of the overall mass distribution of our galaxy in a way that has not been possible with this level of accuracy before."

The relation between the intrinsic brightness of a star and its colour (Hertzprung-Russell diagram) can be mapped with Gaia's exquisite measures of both parameters, illustrating the evolution of stars from birth to death. Prof. Martin Barstow, who leads the Leicester group's contribution to Gaia, is a senior co-author of this illustration science paper. "The huge sample, accurate luminosities and colours, for the first time make visible features in stellar evolution which we have suspected but never seen. For example, we can now see directly the late evolution of stars, once they have ejected their envelopes and become dead cores - white dwarfs - cooling rapidly onto sequences which depend on the chemical element distributions, and so on the lifecycle of the parent star. This superb confirmation of stellar theory has the precision and numbers to allow us to further refine and test our understanding of the end-point of stars like our own Sun." Prof Gilmore further comments "Another property of our Galaxy first discovered in the 1980's (by Gilmore & Reid) is a double structure in old stars, known as the thick disk. Enormous efforts have been made over decades to refine the properties of this remnant of the early evolution of the Milky Way. Now, with Gaia precision, it is manifest by eye. Exciting opportunities for further refinement have arrived!"

Gaia team scientist Dr George Seabroke, of Mullard Space Science Laboratory, "This second Gaia data release includes many new types of data. My work is with the spectra, which by themselves provide two unique pieces of information -the line of sight speeds of stars, but also the detailed properties of each star. With this information for now millions of stars, and hundreds of millions to come, we can start to determine the true history of the chemical elements of which we are made."

"This vast step into a new window on the Universe is a revolution in our knowledge of the contents, motions and properties of our local Universe" said Prof Gilmore. "We look forward to the international astronomical community building on this European project, with its major UK contributions, to interpret these Gaia data to revolutionise our understanding of our Universe. This is a great leap for mankind, but is still an early step. Gaia is continuing to observe, recently reaching its one trillionth measurement. The spacecraft has fuel for another 6-7 years operation, allowing a 10-year operational lifetime. This data set includes 22 months of data. This is a magnificent harvest, but cornucopia awaits. We are all proud to be part of this magnificent project."

Note: Gaia measures parallaxes and proper motions. Descriptions of these are available in "What does Gaia see?"