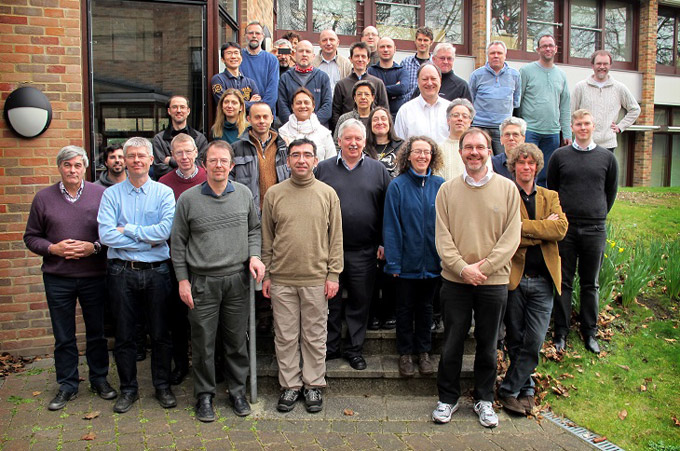 The Gaia team at the Institute of Astronomy in Cambridge is 14 people strong, some of whom are part time, while others are working full time on Gaia. The Cambridge team coordinates and reports on the administrative overheads for UK involvement in the Gaia data processing. In Cambridge we take care of the photometric reductions to an “internal system” for both the measurement from the main astrometric field and the photometric (dispersion spectra) detectors. This work is led by Dafydd Wyn Evans, and concerns issues such as calibration initialisation, optimal selection of calibration stars and defining optimal calibration models. The photometric calibrations will ultimately provide the fluxes (magnitudes) and basic spectral information for all observed stars. Combined with the parallax measurements this will provide stellar luminosities, the actual fluxes produced by stars, for stars in a wide range of temperatures, composition and stages of evolution.

Giorgia Busso is leading the development work on the preparation of the dispersion spectra data, where specific problems concern the determination of the background signal and the partial blending of images. In a dispersion spectrum the stellar image is spread out over colour. It therefore occupies more space on the detector than a normal stellar image. This results in more images overlapping, which needs to be taken care of in the data processing.

Diana Harrison developed software for Source Environment Analysis (SEA). The SEA software is used to check for the presence of faint companions to sources, which can disturb, or even distort, the astrometric and photometric measurements. This software is to be implemented later during the mission, as SEA requires good data coverage to be successful.

All the software for the photometric reductions and the preparation of the dispersion spectra is implemented at the Cambridge Gaia Data Processing Centre, DPCI. The DPCI manager is Francesca De Angeli, while the software implementations at the centre are led by Marco Riello.

Another major task in Cambridge is the production of Science Alerts. This activity, led by Simon Hodgkin, examines new data for unexpected changes, primarily in the brightness of sources. Such changes can indicate transient events such as novae and supernovae, which can then be studied further from ground-based observatories. The Science Alerts software is also to be executed in Cambridge.

In order to ensure that the various processes are producing reliable scientific results, we have developed a quality-control package that allows investigation of reduction results at various levels of detail. Examining all results at the highest detail would be an impossible task, considering that the mission will produce on average 800 CCD transits for each of about 1 billion sources. However, basic statistics of calibrations can be checked, and from there further details can be exposed as necessary. This activity was led by Floor van Leeuwen, who also was the manager for CU5 (until March 2019) and is the manager for the UK Space Agency grant that supports the data processing developments for Gaia. Dafydd W. Evans is the current CU5 manager.

Nicholas Walton is the Data Analysis Specialist member of the ESA Gaia Science Team (GST). The GST advises ESA, through the Gaia Project scientist, on all top-level science performance, science policy and science organization aspects of the mission, including the activities of the Data Processing and Analysis Consortium. The GST issues recommendations to ESA and the DPAC, to maximize the scientific return of Gaia. A key role, with the start of operations of Gaia, has been in overseeing the creation and delivery of the final data products to the broader scientific community. Nicholas also acts as the Gaia Science Team and Beta Testing lead.

Follow Alex Calverley as he explores the IoA. His film, "My Cam - A day at the Institute of Astronomy", was the winning entry of Cambridge University's My Cam competition in 2009. (Skip video.)