The number of Gaia CCDs:

The largest array of CCDs in space prior to Gaia is on NASA’s planet hunting mission Kepler, which has 42 CCDs also provided by e2v. Gaia has 106 CCDs onboard but many more were built as engineering and test models. In total 174 CCDs were actually delivered to Astrium, the company building the Gaia satellite in Toulouse, France. It took 5 years for e2v to manufacture 174 Gaia CCDs and new test facilities had to be built at e2v in Chelmsford to test them all.

The size of each Gaia CCD:

The typical size of a CCD inside a digital camera is the size of your fingernail.  Each Gaia CCD is 4.5 cm by 5.9 cm, which is among the largest ever manufactured in terms of area. In contrast, most astronomical CCDs are extremely thin. The depth of the silicon in Gaia’s CCDs, where the photons are converted into electrons, is one hundredth of a millimetre (0.01 mm or 10 microns). The thickness of a human hair is between 17 and 181 microns.

The complexity of each pixel in each Gaia CCD:

Each Gaia CCD consists of an array of pixels: 4500 by 1966. This means each Gaia CCD contains nearly 9 million pixels. With 106 CCDs onboard, Gaia has nearly 1 billion pixels in total! Each one of these pixels is 0.01 mm by 0.03 mm (about the thickness of a thin human hair). Within each pixel there are unusual features even smaller than this! 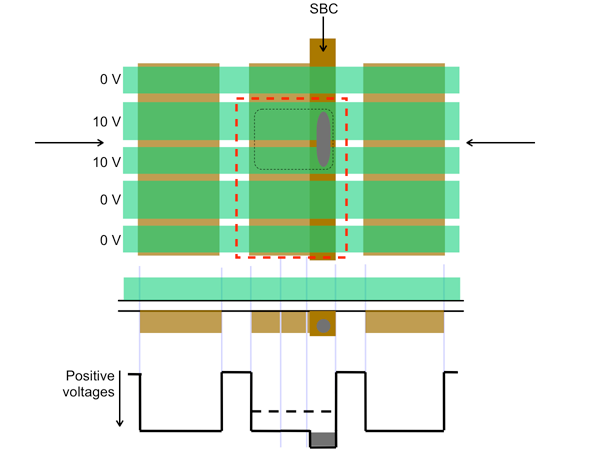 Figure 1: Same as Figure 2 in "How CCDs work" except the CCD contains a SBC in the middle column. In Figure 2 a large charge packet is sitting in the buried channel potential. Here a small charge packet (grey) sits in the SBC potential. Copyright Oxford University Press. (Reproduced with permission of the publisher on a free-to-view basis only and not included under the website's Creative Commons license.)

The ABD is like the overflow drain in a bath. When a charge packet fills a pixel, the excess electrons flow into the ABD (see Figure 2). Without an ABD, the excess electrons overflow into adjacent pixels, corrupting the image (known as charge bleeding). Gaia’s ABDs allow the CCDs to observe very bright stars at the same time as very faint ones. 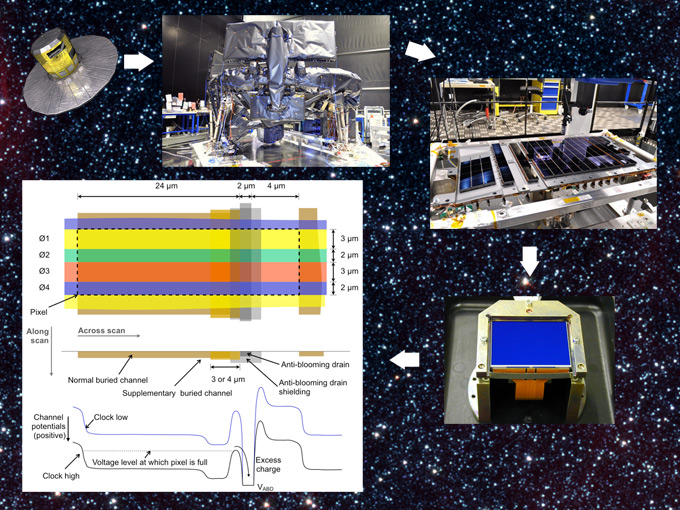 Figure 2: (Clockwise, from top left) From the full size of the Gaia satellite with grey sunshield deployed (10.2 metres diameter) and the golden Thermal Tent Structure (TTS) (image courtesy of ESA - C. Carreau 2010 ) to the Gaia Payload Module (minus the TTS) with the array of 106 blue CCDs (image courtesy of Astrium SAS 2012) to a close up of the 106 CCDs measuring 1 metre by 0.5 metres (image courtesy of Astrium 2011 ) to a single Gaia CCD (0.045 metres by 0.059 metres) (image courtesy of e2v technologies 2004 ) to a single Gaia pixel (0.00001 metres by 0.00003 metres) (image copyright Oxford University Press. Reproduced with permission of the publisher on a free-to-view basis only and not included under the website's Creative Commons license.). View larger image (500 KB).