At the heart of Gaia is an imaging system that employs charge-coupled devices (CCDs) consisting of arrays of optical light-sensitive pixels. These are specially designed versions of the same kind of detector commonly found in digital cameras, but they operate in a particular mode and within the harsh environment of deep space. This results in peculiar artefacts in the data streams, and the Edinburgh team is tasked with dealing with two specific aspects of this problem, along with associated calibration issues.

The first problem concerns the way the CCDs “see” the star field being scanned. In a domestic digital camera, we point at the scene of interest and then click the shutter to get an exposure of usually some fraction of a second. The CCD is then very quickly read out to capture an image of the scene as a stream of data numbers that reflect the electronic charge in each pixel produced by incident light from the scene. A clue to the way in which a CCD is read out is in the name: each pixel is “charge-coupled” to its neighbours such that once exposed, the array of charge measurements can be moved across the pixel array and into a line of light-insensitive, but similarly charge-coupled pixels known as the read-out register which is itself clocked to shift charge to produce a sequence of data numbers, hence the CCD is read by shuffling each line of pixels in turn into this serial register. However in Gaia, rather than using the familiar point-and-shoot mode we commonly employ when using a digital camera, the CCD is continually clocked in what is known as time-delay integration (TDI) mode. As the satellite scans the sky, the CCD is continually clocked such that the scene shuffles across the device at a rate that exactly counteracts the scan. Hence, rather than observing individual pointed frames, a long image strip is imaged by each CCD. Figure 1 shows a  (very) short simulated example of such a strip image. 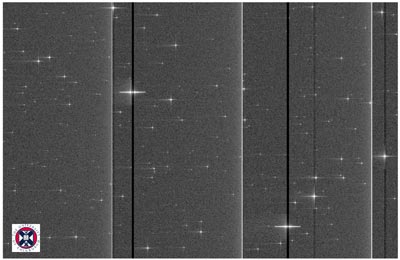 This simulation shows several interesting features of Gaia imaging. For orientation, Gaia is scanning from right to left, while the CCDs are clocked to shuffle charge from left to right in order to compensate for the image motion. Ignoring the vertical stripes for the moment, we can see star images on a flat background with the familiar diffraction spikes introduced by Gaia’s imaging system of mirrors. However if we look closely on the left hand (trailing) side of each image we can see that charge has been smeared away from the centre. This effect is known as charge-transfer inefficiency (CTI) and is the result of radiation damage to the CCD pixels (see also The Radiation Task Force and The Gaia CCD challenge). Incident radiation (primarily solar protons in this case) damage the crystalline structure of the CCD pixels inducing traps that grab charge from passing signals as they are shuffled along the columns of pixels. This trapped charge is then released a short time later, but after the signal has passed. In this way, the image of each star is distorted a small but significant amount, and this distortion will get worse as the radiation dose received by Gaia increases throughout its mission. Note that the bright vertical lines in the images are periodic, artificial “charge injections” that will be employed in the Gaia CCDs to fill up charge traps as much as possible so that passing images are distorted less; the dark vertical lines correspond to transient reduced exposure times triggered by the transit of very bright stars to avoid CCD pixels becoming unusably soaked with charge in those images. While primarily beneficial, these phenomena create additional complications in the processing of Gaia data.

The second problem concerns the way Gaia data is acquired on board the satellite as a result of practical limitations in the volume of data being handled and transmitted back to Earth. In the image example above (Figure 1), most of the pixels see just sky rather than astrophysically interesting objects like stars. During read-out, the Gaia CCDs are configured to “window” the useful data such that most of the sky is excluded, save a small amount around each object. Scientifically interesting pixels within defined windows are digitised relatively slowly for accurate measurement of incident light intensity, while sky pixels are relatively quickly flushed and discarded in the read-out process. This quick-slow-quick read-out induces a rather complex pattern of systematic errors in the digitised data that have to be mimicked on-ground by reconstructing the read-out process and modelling the size of the effects (see also One- and two-dimensional images and Source Environment Analysis presentation.

Working with scientists and engineers within ESA and the Gaia Data Processing and Analysis Consortium, a small team of scientists and software engineers based at the Institute for Astronomy in the School of Physics and Astronomy at Edinburgh University is designing and implementing solutions in software to these challenging problems. The software will run in data processing pipelines running at various Gaia Data Processing Centres across Europe including those at Cambridge, Madrid, Barcelona and Paris.

Visit Gaia page on the Institute for Astronomy website.