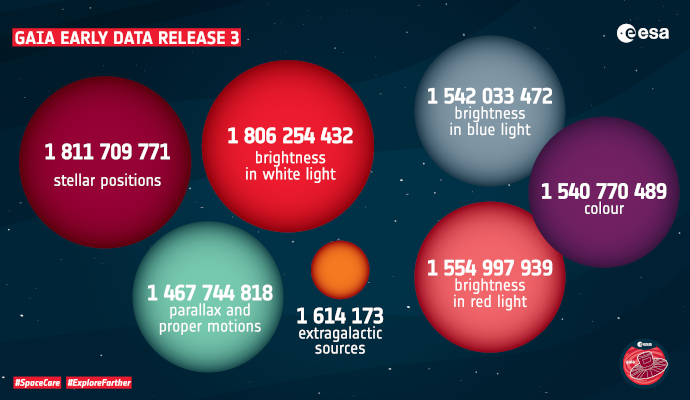 On 3 December 2020, ESA presented the first part of the 3rd Gaia data release (Gaia Early Data Release 3, Gaia EDR3). This includes the astrometry and broad-band photometry that will also be part of the complete 3rd Gaia data release, scheduled for the first half of 2022, and which will contain in addition a wide range of derived products such as variability investigations and astrophysical parameters. Gaia EDR3 delivers data for just over 1.8 billion sources.

The Gaia data releases are making  a very broad and deep impact on astrophysics, touching nearly every aspect of astronomy. This is reflected in high numbers of papers using the Gaia data, and similarly high number of citations to many of these papers.

The astrometric data in Gaia EDR3 are characterized by parallaxes with precisions improved by on average a factor 1.5, and proper motions improved by on average a factor 2. Systematic errors in the parallaxes have been investigated in great detail, and tend to be at a level of 10 to 20 micro arcsec, with dependencies on brightness and position on the sky. A provisional algorithm is provided that significantly reduces systematics in the parallax zeropoint. The improvements in the proper motion accuracy with respect to the 2nd Gaia data release stems from the longer time span covered, as proper motion accuracies improve with the length of the time span to the power 1.5. This also means that for the 4th Gaia data release, which is to cover 66 months of data, a further improvement in proper motion accuracies by a factor 2.7 should be expected. The impact of these improvements in the astrometric data has been demonstrated in the papers accompanying Gaia EDR3, in particular on the Large and Small Magellanic Clouds, where multiple populations can now be distinguished, and in the census of the 100 pc sphere around the Sun, where the full 6D phase space can be studied for over 330 000 stars. Radial velocities for many of the stars are also a Gaia data product. 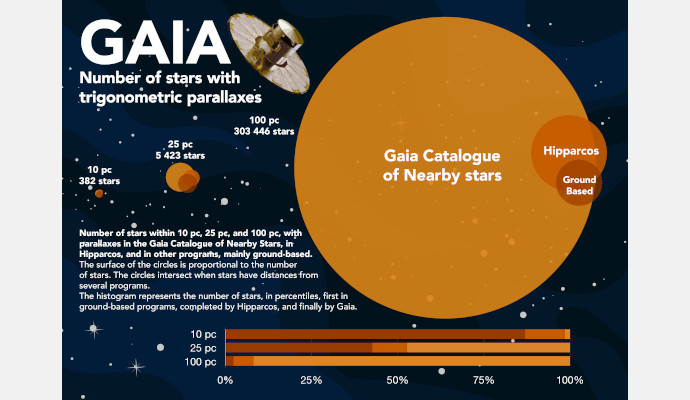 Figure 2: The Gaia Catalogue of Nearby Stars (GCNS) compared to previous compilations. The figure represents the number of nearby stars with trigonometric parallaxes, within 10 pc, 25 pc and 100 pc. The colors gives the catalogues obtained, from dark to light brown, from ground-based, Hipparcos, and GCNS. The surface of the circles is proportional to the number of stars. The total number is given. The circles overlap when the stars are common in several catalogues. The histogram (with same color code) gives the percentage of stars in ground-based catalogues, then additionally in Hipparcos, and finally in GCNS. Image credit: C. Reylé, S. Anderson, Univ. Bourgogne Franche-Comté and ESA/Gaia/DPAC. Image license: CC BY-SA 3.0 IGO.

A crucially important element of the Gaia data releases is the photometry, prepared and delivered by the Institute of Astronomy in Cambridge (IoA) as part of the UK participation in the Gaia data processing. It covers broad band photometry in a "white", "red" and "blue" channel, and low-resolution dispersion spectra for the red and blue channels. The photometric data is unique in many ways: it represents a high resolution (currently about 0.5 arcsec, but 0.2 arcsec is possible) homogeneous all-sky survey, something that is not possible to achieve with ground-based photometry, and is doing so at a close to mmag level accuracy. The combination of this high-accuracy photometry with the astrometry providing accurate distance moduli for 100s of millions of sources opens the doors to a wide range of detailed studies, ranging from galactic dynamics and the history of our Galaxy to detailed studies of star clusters, both open and globular, and the detailed information this provides for studies of stellar evolution.

Figure 2: The image shows pattern of apparent QSO proper motions as observed by Gaia, due to the galactocentric acceleration of the Solar System. The map is shown in the equatorial coordinate system, right ascension = 0 in the centre and increasing towards the left.The Hammer projection allows to see the entire sky. Arrows indicate the size and the direction of proper motions. Image credit: S. Klioner, TU Dresden, free usage allowed.

One particular application of the Gaia EDR3 data is the detection of the measurement of the acceleration of the Solar System, the change in the direction of the velocity vector of the Solar System in space. The velocity of the Solar System in space is relatively large with respect to the speed of light, causing the positions of distant objects as observed to be significantly affected, at a level of about 158 arcsec, by aberration. The direction of the Solar System velocity vector changes as it rotates around the Galaxy, reflecting the gravitational pull from the Galaxy. As a result, the aberration applicable to each source changes. This change is now possible to measure, as it reflects in a very specific and systematic proper motion pattern for objects such as Quasi-Stellar Objects (QSOs), for which no actual proper motion could be observed. The amplitude of this effect is at a level of a few micro-arcsec per year,  and has been measured to be equivalent to an acceleration of about 7 km/s/Myr (2.32 x 10-10 ms-2).

The new data release is the result of the analysis of the first 34 months of data collected by the satellite and analyzed by the Gaia Data Processing and Analysis Consortium, covering the activities of around 400 scientist and 6 data processing centres, spread over Europe, and involved in the Gaia data processing. The UK contributes through the IoA in Cambridge, the Institute for Astronomy (IfA) in Edinburgh, Mullard Space Science Laboratory (MSSL; UCL) and the University of Leicester. The UK contributions are supported by grants from the UK Space Agency and the STFC.

All data products are made available to the public through Gaia archive and its partner data centres.

More information about Gaia EDR3 can be found in Gaia EDR3 section of ESA website.

Gaia EDR3 Question and Answer videos are available from https://www.cosmos.esa.int/web/gaia/edr3-questions-answers.

Background information about Gaia EDR3 and videos demonstrating Gaia EDR3 data can be found at https://www.cosmos.esa.int/web/gaia/edr3-stories.

Recording of the Gaia Science and Media Briefing hosted by the Royal Astronomical Society: https://www.youtube.com/watch?v=HesPN2oYPUI&feature=youtu.be

Gaia Early Data Release 3 Astropod podcast of interviews with the Gaia team members working at the Institute of Astronomy in Cambridge: https://open.spotify.com/episode/5G5oxoTejIafyJt12MT8ii?si=ZhH5sWzOR6ei6...

Institute of Astronomy, Cambridge (contact details are available from https://www.ast.cam.ac.uk/people/staff):