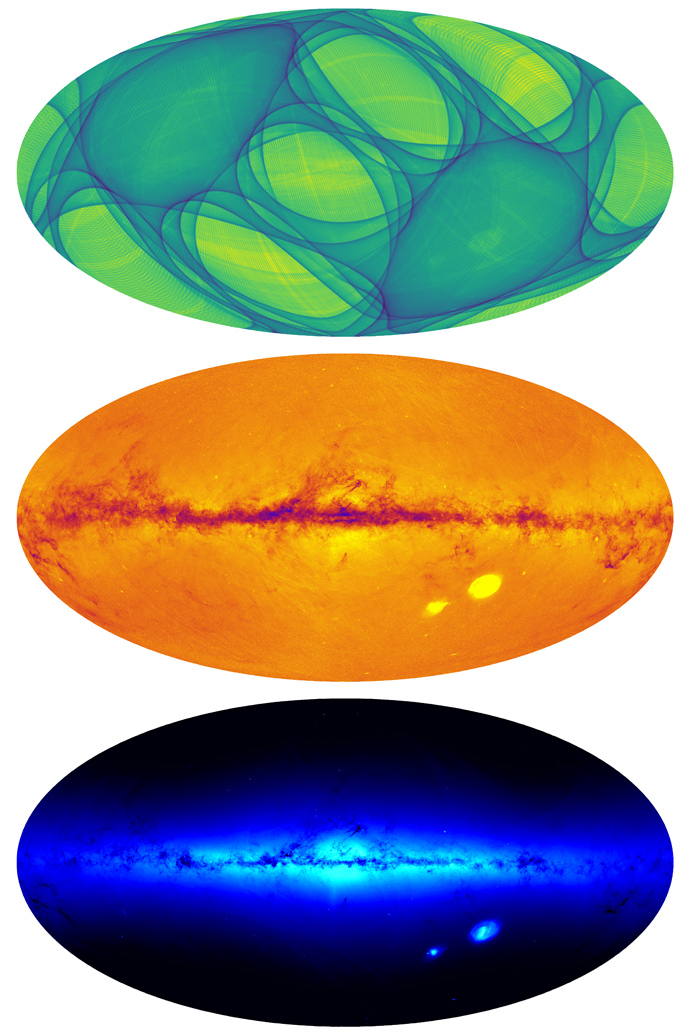 Dr Mark Taylor won the Beauty of Data 2018 competition (a Jean Golding Institute competition to find the best University of Bristol data visualisations) for his Gaia sky map images. The images submitted to the JGI Beauty of Data competition were generated from Gaia Data Release 2 catalogue data (0.8 Tb, spanning 22 months of observations) downloaded from ESA, using the TOPCAT/STILTS astronomical analysis software that has been developed by Mark in Bristol since 2003.

The images are high-level overviews of the Gaia DR2 catalogue, presented as sky maps in an Aitoff projection of the whole sky, with the disc of the Milky Way running horizontally along the “equator”.

The first image (top) represents the number of times that Gaia has observed each part of the sky so far, in some regions as few as 2, in others as many as 100. It shows beautiful loops and whorls that are a consequence of scanning law.

The second image (centre) shows a measure of the averaged redness of the observed stars in each direction. As dust along the line of sight has a reddening effect, the darker regions in most cases indicate clouds of interstellar dust between us and the distant stars.

The third image (bottom) is a density map, with the brightest regions indicating where most stars are visible.

For more information and high resolution versions of the images see the Jean Golding Institute blog.

Acknowledgement: This work has made use of data from the European Space Agency (ESA) mission Gaia (https://www.cosmos.esa.int), processed by the Gaia Data Processing and Analysis Consortium (DPAC https://www.cosmos.esa.int/web/gaia/dpac/consortium). Funding for the DPAC has been provided by national institutions, in particular the institutions participating in the Gaia Multilateral Agreement. Work on TOPCAT/STILTS has been supported by a number of funding agencies, most importantly the UK Science and Technology Facilities Council.