Why we take spectroscopy 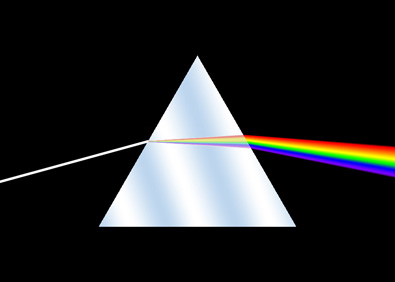 Gaia finds new Alerts every day - but what happens next? The first thing astronomers want to know about an Alert is what sort of event it is. Is a new discovery a supernova explosion, a flare from around a black hole, or something else? Sometimes, we can answer this question using the information from Gaia itself. For example, the BP/RP instrument on board Gaia will help us distinguish between the brighter classes of transients. But for discoveries that are fainter, this is often not possible.

Astronomers will often take "follow-up" observations using different telescopes, to understand and classify an Alert. Among the most useful instruments that astronomers will use for this are "spectrographs". A spectrograph is a device that splits light into many different colours, or "wavelengths". The simplest example of a spectrograph is a prism, a triangular shaped piece of glass which when held up to the light will split it into the colours of the rainbow. The spectrographs astronomers use are more sophisticated than this, but still work on the same basic principle.

With a spectrograph, astronomers can split the light from a star, galaxy or object into the sky into its constituent colours. In doing so, we can gain valuable clues as to the true nature of an object.

Stars will emit different coloured light depending on their temperature. You may be seeing something similar when a piece of metal is heated in a fire. First the metal will glow red, then yellow as it continues to heat up, then eventually it will appear white as it reaches its hottest temperature. The light that stars and other astronomical objects emit will similarly depend on their temperature. So, by measuring how much blue light we see, and how much red light, we can determine the temperature of the Alert.

What materials are present

Everything in the Universe is made up of a combination of about 100 types of atom. We call these different types of atoms "elements", and many of these elements such as oxygen, calcium, carbon and hydrogen are very familiar to us on Earth. These same elements can be found in stars and galaxies throughout the Universe. Atoms of each element will absorb and emit light at some very specific colours (or wavelengths). This is the reason why some street lights have a yellow glow - this colour is caused by the emission of light from the element mercury. Since each element has a unique set of colours it emits and absorbs light at, this can act as a "fingerprint", allowing us to determine what elements are present in a distant Alert using only a spectrograph.

How far away an Alert is

If you have ever listened to an ambulance drive past, you will notice that the pitch of the siren changes. This is called the "Doppler effect", and is a result of the sound waves becoming squashed together or stretched apart, depending on whether the ambulance is moving towards or away from you. The same phenomenon affects light, except that rather than changing pitch, light will become bluer or redder depending on if it is moving toward or away from us. From this, astronomers can measure how fast an Alert is moving away from us. Since the entire Universe is expanding from the Big Bang, every distant object appears to be moving away from us (this is called redshift), and by seeing how fast it is moving away, astronomers can calculate an object’s distance.

So, spectrographs can give us information on the temperature, composition and even distance of an Alert. Using these clues, we can start to understand what the cause of any given Alert is!