Skip to main content
Home » Mission » What does Gaia see? 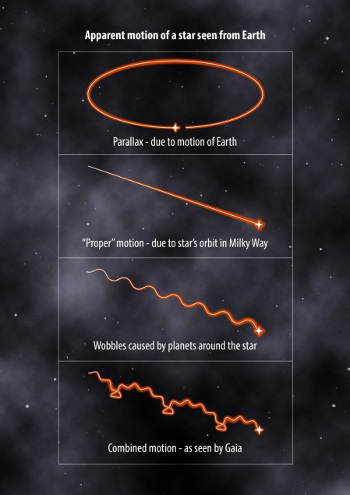 What does Gaia see? How does a star appear to move when observed from earth?

There are three separate movements, one caused by Gaia – and us -  moving with the Earth around the Sun, one caused by the stars moving through the Milky way, and often a third wobble, caused by planets around the star. Let us look at each of these.

The first motion is an apparent motion, not real motion by the star. This motion, called parallax,  is caused by our movement around the Sun. Parallax is easy to understand – just hold a finger out in front of your face, close one eye at a time, and watch your finger appear to move compared to more distant objects. Parallax is how we see in 3-dimensions, and so know how far away things are from us on earth. In astronomy the effect is the same – but stars are at very large distances indeed. So we need to look from directions when the Earth has moved as far apart as possible – say summer and winter. We also need to measure very small apparent motions of the star.

The second motion of a star which Gaia will measure is real motion – it is the motion of each star in the Milky Way.  The Sun moves around the centre of the Milky Way at a speed of about 220km/second (10,000,000,000 miles/hour), and most other stars move at similar speeds. The motion of this speed, called “proper” motion, will be measured by Gaia, and used to calculate how the star is orbiting in the Milky Way, and in some cases, where that star came from.

The third motion is caused by planets around a star. Many people imagine the Sun fixed at the centre of the Solar System, with the Earth and other planets orbiting around. This is not correct: as Newton first realised, the planets and Sun all orbit around the place which is the centre of all the mass in the system, including the planets. This centre moves as the planets move. Since Jupiter is quite heavy, this mass centre in the Solar System is just beyond the surface of the Sun – thus the Sun orbits, with a period of the Jupiter year, about this point. That is, stars wobble if they have heavy planets nearby. Gaia will measure this wobble, and so discover the planets.

The combination of all those motions, apparent and real, ensure each star moves in a very complex pattern across the sky. Untangling this complexity is why Gaia needs to make so many measurements – 80 on average – of every star.