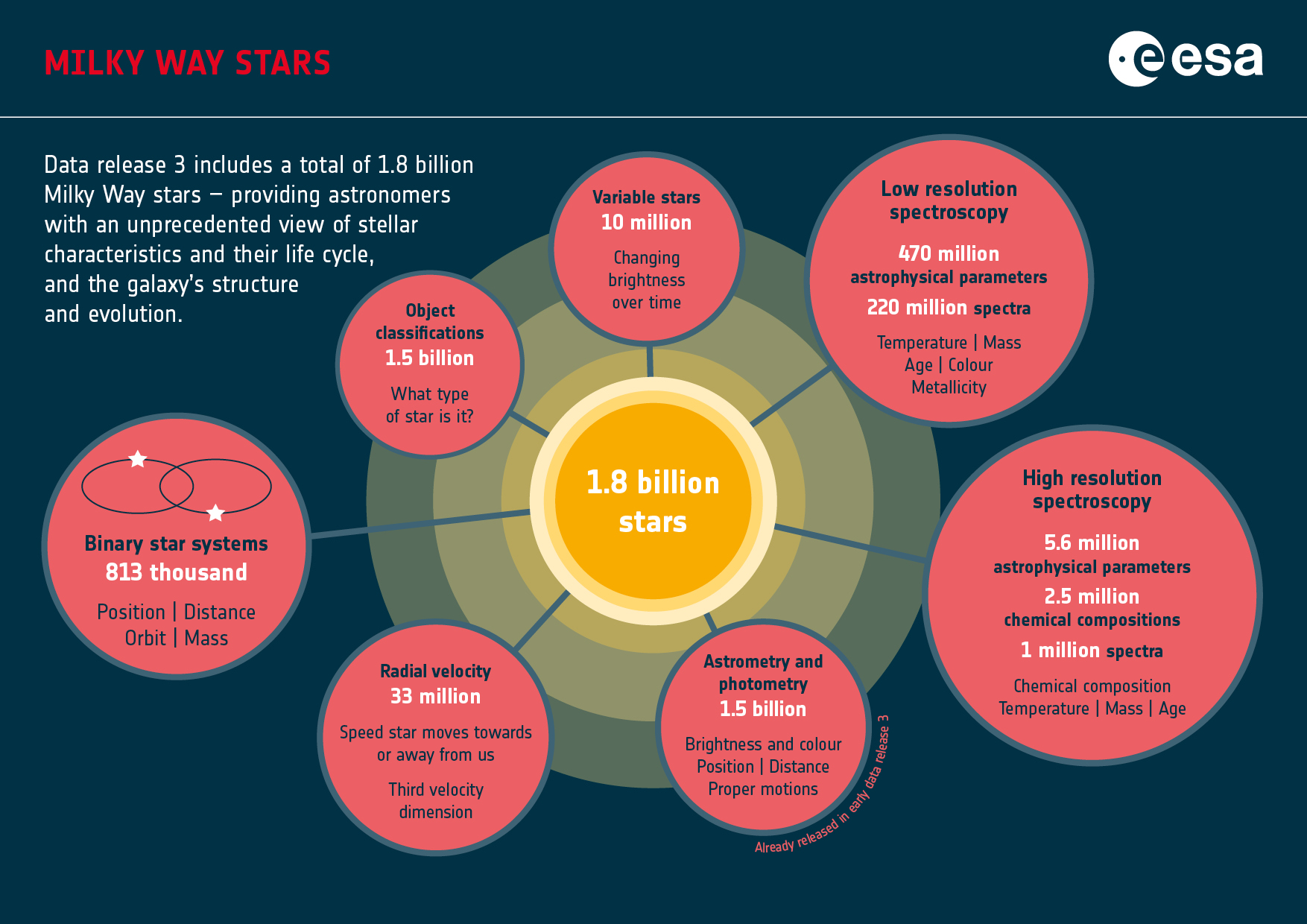 Gaia Data Release 3 (Gaia DR3) was published on 13 June 2022. The data is available through the Gaia Archive. The Gaia DR3 catalogue builds upon the Early Data Release 3 (released on 3 December 2020) and combines, for the same stretch of time, these already-published data products with numerous new data products such as extended objects and non-single stars.

The set of data released as Gaia Early Data Release 3:

In Gaia Data Release 3 (Gaia DR3), the above set of data is complemented with new products released on 13 June 2022 (EAS presentation A. Vallenari):

The new data set neither contains new astrometry nor new photometric calibrations such that the following elements are in common for and apply to both Gaia EDR3 and Gaia DR3:

All of the above combined makes up the full Gaia Data Release 3.

Background of the data

Gaia DR3 data (both Gaia EDR3 and the full Gaia DR3) are based on data collected between 25 July 2014 (10:30 UTC) and 28 May 2017 (08:44 UTC), spanning a period of 34 months. As a comparison, Gaia DR2 was based on 22 months of data and Gaia DR1 was based on observations collected during the first 14 months of Gaia's routine operational phase.
The reference epoch for Gaia DR3 (both Gaia EDR3 and the full Gaia DR3) is 2016.0. Remember that the reference epoch is different for each Gaia data release (it was was J2015.5 for Gaia DR2 and J2015.0 for Gaia DR1).
Positions and proper motions are referred to the ICRS, to which the optical reference frame defined by Gaia EDR3 is aligned. The time coordinate for Gaia EDR3 is the barycentric coordinate time (TCB).

Sources in the Gaia Catalogue are uniquely identified through the Gaia Source Identifier, i.e., the source_id field in the various tables in the Gaia Archive. The construction of the source identifiers is explained in the Archive documentation (for Gaia DR1, see the data model section). In particular the source_id number contains rough information about the source position on the sky.

As explained in previous announcements, there are various reasons why the identifier of a specific source may change or disappear when going from the Gaia DR1 to the Gaia DR2 source list and on to the Gaia EDR3 source list. Users of Gaia data should thus be aware that the source list for Gaia EDR3 should be treated as independent from Gaia DR2 and from Gaia DR1.
The Gaia source names for EDR3 will all be constructed as follows:

The source list for Gaia EDR3 and Gaia DR3 is expected to be identical and a Gaia DR2 to Gaia EDR3 match table is already available from Gaia EDR3.

Photometry (G, GBP, and GRP published as part of Gaia EDR3, OTHER DATA ARE NEW IN GAIA DR3)

More information about Gaia DR3 can be found in Gaia DR3 overview section of ESA's website.

The Gaia Archive is the main point of access for the Gaia Early DR3 data, but the data is also served from Gaia partner data centres (CDS, ASDC, ARI, and AIP). Data can be extracted from the Gaia Archive by performing ADQL queries and subsequently downloading the corresponding results tables.

Along with the Gaia DR3 data release documentation, several data processing papers will be published describing the specifics of the data processing and validation performed by the different coordination units in the Gaia Data Processing and Analysis Consortium (DPAC). There will also be some papers on the performance verification of Gaia, providing basic demonstrations of the scientific potential of the Gaia DR3 catalogue.

The titles of the Gaia DR3 performance verification papers will be published on Gaia Data Release 3 papers page on ESA's website.