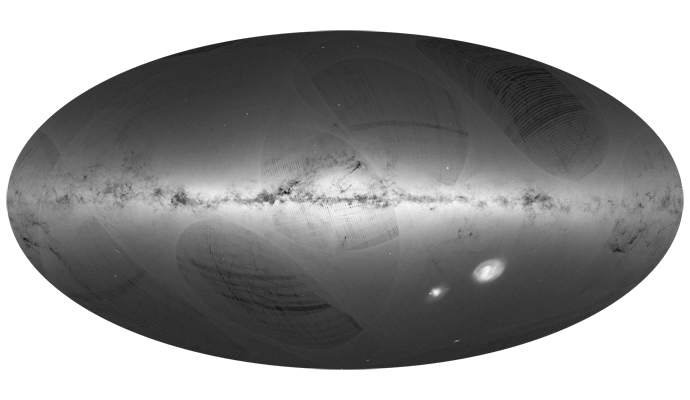 An all-sky view of stars in our Galaxy – the Milky Way – and neighbouring galaxies, based on the first year of observations from ESA’s Gaia satellite, from July 2014 to September 2015. View larger version of this image (4 MB) or the annotated version of the panorama (21 MB). Image generated by: André Moitinho & Márcia Barros (CENTRA - University of Lisbon) on behalf of DPAC. (Credit: ESA/Gaia/DPAC.)

The first Gaia data release, Gaia Data Release 1, has been published on 14 September 2016.

For the field of astrometry – the discipline of measuring the positions of celestial objects – a new era is on the horizon. The first hints of the data bounty that await us will be revealed when ESA's Gaia mission publishes the first data release based on observations taken by the satellite between 25 July 2014 and 16 September 2015.

This first public release of data includes the positions on the sky for more than one billion stars, as well as their 'G' magnitudes – a measure of their brightness.

As an additional bonus, a smaller dataset provides positions, proper motions (the motion of objects across the plane of the sky) and parallaxes (a measure of the distance) for about 2 million stars in common with the earlier Hipparcos and Tycho-2 Catalogues, based on data from ESA's Hipparcos mission.

Measurements of the brightness of more than 3000 variable stars, about 10% of them newly discovered by Gaia, are also made public.

Finally, the positions and brightness of more than 2000 quasars are published; these extragalactic objects are used to fix the coordinate system for celestial objects.

The enormous and challenging task of processing the data and preparing the release has been entrusted to the Gaia Data Processing and Analysis Consortium (DPAC), a European consortium of scientists and software experts.

The purpose of this first release is to prove that the observing strategy and the data processing 'pipeline' are working well. It will demonstrate the high quality of the scientific data derived from the raw satellite observations.

The validation checks include verifying that the estimates of the stellar parameters are scientifically robust and that all effects related to the satellite and instruments are correctly taken into account. Comparisons with the results from previous astrometric catalogues have also been performed.

ESA has a rich history of producing stellar catalogues. The Hipparcos Catalogue was created from data obtained with the science instrument on ESA's Hipparcos satellite, the first space mission dedicated to astrometry, which operated from 1989 to 1993.

A few years later, the Tycho-2 Catalogue was produced, based on measurements from the star mapper on the Hipparcos satellite and on previous ground-based astrometric catalogues that relied on photographic observations made since the late nineteenth century. This catalogue is less accurate but much larger than the Hipparcos Catalogue, listing positions and proper motions of 2.5 million stars. The average accuracy in the Tycho-2 Catalogue is 0.06 arcseconds for positions – improving to 0.007 arcseconds for the brightest stars – and 0.0025 arcseconds per year for proper motions. (One arcsecond is equivalent to the size of the face of a euro coin seen from a distance of about 4 kilometres.)

From the first year of Gaia's observations alone, it is not possible to separate two concurrent effects in the changes of stellar positions recorded by the satellite: the apparent annual shift caused by Earth's motion around the Sun, or parallax, which is inversely proportional to a star's distance, and the continuous motion across the sky as stars drift through the Galaxy.

In fact, the two effects are combined and can be only be disentangled by monitoring the tiny changes in stellar positions over timescales longer than one year. DPAC devised a means to overcome this nuisance for at least a small subset of the stars observed by Gaia: they looked for the stars in common between Gaia's first year of observations and earlier measurements from the Hipparcos and Tycho-2 Catalogues and combined data from all three data sets.

Like every previous stellar catalogue, the Hipparcos and Tycho-2 Catalogues are unique datasets, representing the configuration of stars at specific moments in the history of the Milky Way. For this reason, even though they are less accurate than Gaia's data, they are a valuable complement to Gaia's first dataset. With the additional information recorded over two decades ago, it was possible to separate the contributions of parallaxes and proper motions for the stars in common between the catalogues.

The result is the Tycho-Gaia Astrometric Solution, or TGAS, an additional stellar inventory that is published as part of the first Gaia data release. It provides five parameters – positions, parallaxes, and proper motions – for about 2 million stars.

The first Gaia data release represents a major advance in terms of the availability of high precision parallaxes and proper motions for the two million stars in the TGAS astrometric dataset and in terms of accurate positions and homogeneous all-sky photometry for the more than one billion stars observed by Gaia.

All data from the first Gaia data release are accessible from the Gaia Archive (http://gea.esac.esa.int/archive/), which also provides visualisation tools as well as comprehensive documentation to explore the data sets. In addition, the data are also made available through a number of partner and affiliated data centres located in Europe, the United States, South Africa and Japan.

Towards the final Gaia catalogue

In the early 2020s, the final Gaia catalogue will be published. This will be the definitive stellar catalogue for the foreseeable future, playing a central role in many and varied fields of astronomy.

Producing this final catalogue is a complicated endeavour that requires the entire mission dataset and a complex processing chain devised and tested by hundreds of scientists and software experts in the Gaia Data Processing and Analysis Consortium (DPAC).

Even before the first data release special subsets of Gaia data are being made public to facilitate timely follow-up observations by the wider astronomical community. For example, Science Alerts – announcements to the scientific community about detected transient events such as supernovae and outbursting stars – are regularly issued. The Gaia coordinates for one particular star were made available, in advance of the data release, to astronomers studying a rare occurrence of Pluto passing in front of this star.

Following the first data release in September 2016, the release of new datasets, based on longer time intervals and with additional data products, are planned to take place with a cadence of about one per year. These will be characterised by increasingly improving precision and additional parameters for the surveyed stars, as well as for other celestial objects – from Solar System bodies to galaxies beyond our Milky Way.

Eventually, the final catalogue will contain full astrometric (position, distance and motion) and photometric (brightness and colour) parameters for over one billion stars as well as extensive additional information including a classification of the sources and lists of variable stars, multiple stellar systems and exoplanet-hosting stars. For more than 150 million stars there will be measurements of the radial-velocity – the speed at which the star is travelling towards or away from us.

The final Gaia catalogue will be a census of our Galaxy of such superb precision and detail that it will redefine the fundamental reference frame used for all astronomical coordinate systems. This will truly mark a new era of astrometry.

Spacecraft dimensions: The spacecraft body (payload and service module) is 4.3 m wide and 2.3 m high; the spacecraft is 10 m across when the sunshield/solar array assembly is deployed.

Orbit: Gaia circles the Sun in a Lissajous-type orbit at the L2 Lagrangian point, 1.5 million km from Earth in the opposite direction with respect to the Sun.

Data Processing and Analysis Consortium: The Gaia Data Processing and Analysis Consortium (DPAC) is formed by about 450 scientists and software experts, who have been entrusted with the task of converting the telemetry data into scientifically meaningful information and preparing the data releases, including the final Gaia Catalogue. Members of the DPAC come from twenty European countries (Austria, Belgium, Czech Republic, Denmark, Estonia, Finland, France, Germany, Greece, Hungary, Ireland, Italy, Netherlands, Poland, Portugal, Slovenia, Spain, Switzerland, Sweden, and the United Kingdom) as well as from further afield (Algeria, Brazil, Israel, and the United States). In addition, ESA makes a significant contribution to DPAC in the form of the Data Processing Centre at the European Space Astronomy Centre (ESAC) in Spain, which amongst other tasks and responsibilities, acts as the central hub for all Gaia data processing.

Industrial contributions: Gaia was designed and built by Astrium (now Airbus Defence and Space), with a core team composed of Astrium France, Germany and UK. The industrial team included 50 companies from 15 European states, along with firms from the US. Some 80 contracts were placed with European companies and three with those in the US. The spacecraft was launched by Arianespace on an STB/Fregat MT Soyuz rocket. Between 2,500 and 3,000 people in all are involved in the mission.

Cost: The total cost of the mission, from the beginning of preliminary studies to the end of operations, is 740 M€. This does not include expenditures related to the DPAC consortium, currently estimated at around 250 M€, which are covered by the contributing countries participating in the consortium, not ESA. The price tag for the spacecraft itself is 450 M€.

Mission name: Gaia was the acronym for Global Astrometric Interferometer for Astrophysics, the original name of the mission. This reflected the technique of optical interferometry that was first planned for use on the spacecraft. Although the acronym (written GAIA) is no longer applicable, the name (Gaia) remains to provide project continuity.

Access: All the data was made available from the ESA Gaia Archive: http://gea.esac.esa.int/archive/ and from the main partner data centres:

Gaia data can also be downloaded directly in CSV format from http://cdn.gea.esac.esa.int/Gaia/ .

Gaia Data Release 1 UK Science Workshops. The UK Gaia project is organising a series of one day workshops open to interested astronomers in the UK. These will provide a basic introduction to the Gaia mission, an overview of the catalogue contents including scientific quality and practical information on how to handle and access them from the Gaia archive for science research.

GDR1 World of Physics article. Download the aritcle by Gerry Gilmore and Floor van Leeuwen, "A billion pixels, a billion stars" (PDF, 5 MB), to be published in September 2016 issue of Physics World.

Gaia Sky 3D visualisation software. The Gaia Sky is a real-time, 3D, open source astronomy visualisation software that runs on Windows, Linux and OS X. It is developed in the framework of ESA's Gaia mission to chart about 1 billion stars of our Galaxy in the Gaia group of the Astronomisches Rechen-Institut (ZAH, Universität Heidelberg). A new release, built with TGAS catalogue, is available.

Gaia soundtrack. Download Gaia soundtrack (mp3; 2.4 MB; right-click on the link and choose to save the file) by Jose Caballero. It lasts 60 s and can be played in an infinite loop. No lyrics. Easy to insert in videos. You are FREE to use it in ANY Gaia outreach activity. Soundtrack credit: Machuca+Arias+Caballero.

Gaia posters. A set of 16 Gaia posters in PDF format. English, Spanish and German versions are available. The posters, based on the original Gaia posters in Spanish prepared by the team from the University of Barcelona, were translated into English, improved, and technically implemented by the joint team from ARI/ZAH, University of Heidelberg and Lohrmann Observatory, Technische Universität Dresden: Stefan Jordan, Toni Sagristà Sellés, Hagen Steidelmüller, Michael Soffel, and Sergei Klioner. For more information and to download the posters in English visit our Gaia posters page.