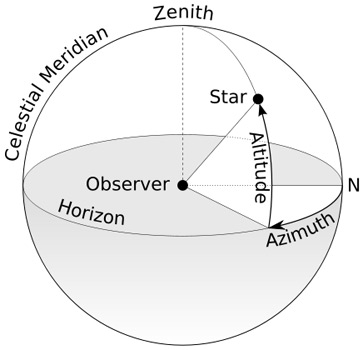 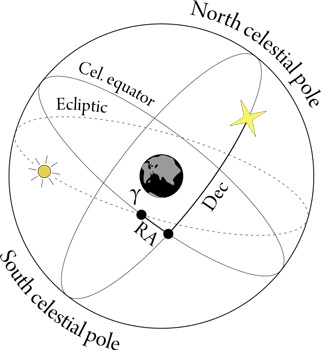 Astronomer 2: Wow! Where is it, so I can also have a look at it too?

Pointing doesn't really help most astronomers when they want to know where to look to find a specific object. Some form of system has to be devised to help describe where on the sky your amazing new discovery can be found.

The most basic coordinate system is the Alt-Az system (Altitude and Azimuth) and is useful if you are doing naked-eye or binocular observing. First, you need to know in which direction to stand (North, East, SSW, 3 degrees clockwise from North, etc.). This is the Azimuth. Then you need to know how many degrees above the horizon you should look (the Altitude). The problem with this system is that not only is it dependant on where in the world you are standing, but the sky is also moving with respect to you. This means that the coordinates that you have been given have to be calculated knowing where and when the observation is about to take place.

A more useful system for astronomers is the Equatorial system which is based (sometimes loosely) on the celestial poles, where the sky appears to be stationary. This system is fixed on the sky so is useful for longer-term descriptions of sky position. In the Equatorial system declination is measured from the celestial equator, with the North Celestial Pole therefore being at +90 degrees. The other coordinate needed is Right Ascension which is measured from the vernal equinox. Traditionally, Right Ascension is measured in hours with a full circle being 24 hours.

This would be fine if it wasn't for the annoying fact that the Earth's pole moves (very slowly) with respect to the fixed sky. The major part of this movement is called precession, but there are other motions of the polar axis caused by the Moon (nutation) and the ocean currents (polar motion). Because of these changes, you don't really want to have to recalculate the position of an object due to the way the Earth is spinning on a particular day. So astronomers generally fixed the pole of the coordinate system to where the pole was pointing to on a specific, well-defined date and time e.g. 1 January 2000, 12h TT. This particular coordinate system is said to have an equinox of J2000.0. This was the standard system that was adopted by the International Astronomical Union (IAU) at their General Assembly in 1976, to be phased in from 1984.

Since then, the IAU have decided to move away from using the Earth's pole to define the coordinate system and adopt a non-rotating system that is based on very distant objects. This is the International Celestial Reference System (ICRS) and, to a good approximation, has been defined to have the same pole as the J2000 system. The IAU adopted the ICRS in 2000. Since this system is fixed in space and is not linked to the Earth's pole, it does not have an equinox associated with it. In order to define the ICRS, the ICRF (International Celestial Reference Frame) was published and is the realization of the ICRS and consists of 212 defining extragalactic radio sources. This means that the system is effectively defined by the positions given for these sources in this publication. An update of the realization of the ICRS occurred in 2009 and is called ICRF2 and consists of 3414 compact radio sources. See The Gaia Celestial Reference Frame (Gaia-CRF2) for infortmation about the Gaia Celestial Reference Frame (Gaia-CRF2), defined by means of the Gaia Data Release 2 measurements for 556,869 quasars.

The ICRS is the coordinate system currently used by astronomers (or should be used!) and will be system used for the positions given in the Gaia catalogue.

Additionally, there are two other coordinate systems that are used that can be helpful when trying to understand the context of a particular source. These are the ecliptic and Galactic coordinate systems. Both are described by longitudes and latitudes, but have different planes defining zero latitude. In the former case, the plane is the ecliptic, where the orbits of the Earth and the planets approximately lie. The latter case uses the Galactic plane. The longitude zeropoints for these systems are the vernal equinox and the Galactic centre respectively. An example of the use of these systems is if you want to avoid the crowding that occurs in the Galactic plane, you might exclude sources with an absolute Galactic latitude smaller than 10 degrees. Note that, in general, these two coordinate systems are not calculated to any great accuracy since only an approximate idea of where on the sky with respect to these planes and poles is usually needed.

Vernal equinox: The point where the Sun crosses the equator from south to north is called the vernal (or spring) equinox.

TT: Terrestrial Time (TT) is a modern astronomical time standard defined by the International Astronomical Union, primarily for time-measurements of astronomical observations made from the surface of Earth. See: https://en.wikipedia.org/wiki/Terrestrial_Time .