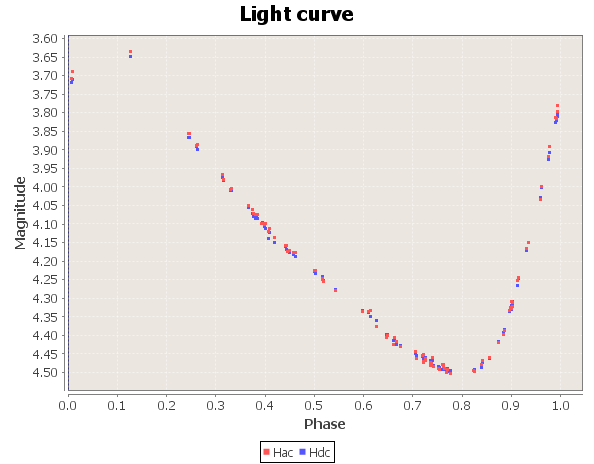 Delta Cephei light curve. The light curve for the star delta Cephei (period of 5.366 days), as observed with Hipparcos. A parallax of 3.77 mas, with a standard error of 0.17 mas, was determined for this star in the new reduction. (Hac and Hdc refer to two different types of broad visual band stellar magnitudes measured by Hipparcos).

Even with the extremely high accuracies of the parallax measurements by Gaia, we are still far from reaching intergalactic distances. The first steps in measuring distances beyond our own galaxy involve observations of specific classes of pulsating variable stars, and in particular delta Cephei stars, often referred to as “Cepheids”. The variations shown by Cepheids are regular and strictly periodic, where the period depends on the actual brightness of the star. This is called a Period-Luminosity (PL) relation, which can be observed when studying a large group of Cepheids situated at the same distance, such as in the Magellanic Clouds.

What can be directly observed for Cepheids in our Galaxy are the apparent brightness and the period of the variations. Comparing the observed apparent brightness with the expected actual brightness for the observed period can then provide an estimate of the distance. As Cepheids are intrinsically very bright, they can be observed at large distances, and can be used to determine distances when observed in other galaxies. The problem is, however, to provide an independent and reliable calibration of the relation between variability period and brightness, in particular as various other secondary dependencies, such as chemical composition, also play a role.

Cepheids are relatively rare stars, and very few occur near enough to the Sun to measure their distances directly through parallax measurements. The Hipparcos data, and in particular the new reduction, has provided the first substantial set of Cepheid parallax measurements, by means of which it has been possible for the first time to directly calibrate the luminosities of about 100 Cepheids, and to observe the Period-Luminosity relation for these stars in our own galaxy. The Gaia data will very much improve the determination of the Period-Luminosity relation for Cepheids. By measuring parallaxes ten times more accurate than Hipparcos, and covering a much wider range in brightness, the number of Cepheids with accurate parallaxes is expected to increase by at least a factor 100. There will still be problems to solve though. In particular the light-absorbing effects of dust in the Galaxy will increasingly affect the observed brightness as we include Cepheids at larger distances. Here the photometric data as processed by the Gaia DPAC Coordination Unit 5 in Cambridge will provide crucial information, from which it will be possible to determine how the light observed for each star is affected by absorption through dust.