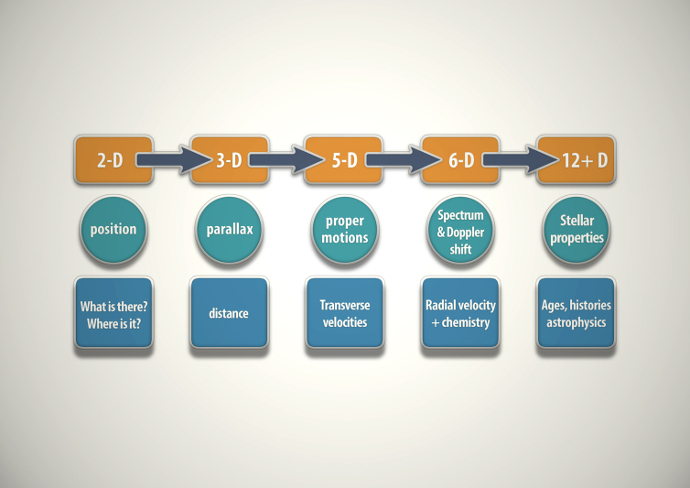 Watch the replay of Gaia's launch.

The Milky Way – our home galaxy.  How big is the Milky Way? How old is it? How much does it weigh? When did it form? What shape is it? Where are the stars? How fast do they move?

Questions such as these will be answered for the first time by measurements from the satellite Gaia (why Gaia?).

Gaia is the European Space Agency satellite which will provide the first 6-Dimensional census of the  Milky Way. Six dimensions means  determining precise 3D distances, 3D motions and in addition determining the basic astrophysical properties for one billion stars, one percent of the stars in our Galaxy. Gaia will image the sky with its billion-pixel video camera for 5 years, delivering data which will revolutionise our view of the Milky Way, while making substantial advances in mapping our inner Solar system, testing gravity, and providing the first robust distance scale in cosmology.

Why six dimensions? To understand this we need to consider how astronomers study the Universe. (See also Space velocities, radial velocities and proper motions.)

Gaia’s science ambitions are truly revolutionary. There are roughly 100 thousand million (100,000,000,000) stars in the Milky Way. Today we know accurate distances (one percent accuracy) to only a few hundred (seven hundred) of these. So we don’t know where stars really are, we don’t know how bright they really are, we don’t know how they are moving through space. Gaia will provide one-percent accurate distance for 10 million stars! And excitingly good distances for one billion stars. For the first time we will know what stars are like, where they are, how they are moving.

It is this multi-dimensional data which astrophysicists interpret to deduce where and when stars, their planets, and the chemical elements were formed, what else is there in the Milky Way we cannot see – mostly Dark Matter, and how the Milky Way itself came to form and become what it is today.

As if this weren’t impressive enough, Gaia will discover thousands of supernovae, tens of thousands of new planetary systems around other stars, will monitor hundreds of millions of variable stars, will study 500,000 quasars across the Universe, will measure how space-time is warped by the gravitational fields of the Sun and major planets, and provide our first census of asteroids in the inner Solar System.