The night sky is full of variable objects, from exploding stars to transiting exoplanets. A Supernova is one of the most dramatic events in the night sky, and results from the massive explosion of a star. There are two main types of Supernovae.

1. A core-collapse Supernova is the explosion of a giant star which has run out of nuclear fuel at the end of its normal life. With no source of energy to hold the massive star up against the force of gravity, the iron core collapses dramatically forming a neutron star or black hole at the core, and expelling the outer layers violently and with a dramatic increase in brightness.  Stars are responsible for the generation of the heavy elements that we find on Earth today (everything that is not Hydrogen, Helium or Lithium). And Supernovae are the ultimate distribution mechanism to make sure these elements are mixed into the Interstellar Medium, and ultimately go into the formation of  solar systems, planets, and ourselves.

2. Type Ia Supernovae result from runaway nuclear fusion of and total disintegration of a carbon-oxygen white dwarf which has been accreting material from a companion star. Type 1a Supernovae can be used as standard candles to measure accurate distances to galaxies throughout the Universe. They provide strong evidence that the expansion of the Universe is accelerating, and suggest the existence of Dark Energy (which nobody understands yet). 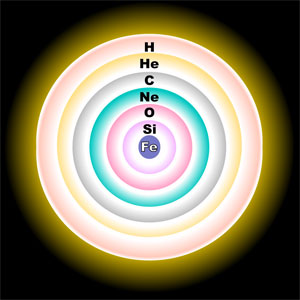 Fusion shells. The diagram shows a simplified (not to scale) cross-section of a massive, evolved star (with a mass greater than eight times the Sun.) Where the pressure and temperature permit, concentric shells of Hydrogen (H), Helium (He), Carbon (C), Neon/Magnesium (Ne), Oxygen (O) and Silicon (Si) plasma are burning inside the star. The resulting fusion by-products rain down upon the next lower layer, building up the shell below. As a result of Silicon fusion, an inert core of Iron (Fe) plasma is steadily building up at the center. Once this core reaches the Chandrasekhar mass, the iron can no longer sustain its own mass and it undergoes a collapse. This can result in a supernova explosion. Source: User:Rursus, 2011, Evolved_star_fusion_shells.svg. Published under the Creative Commons Attribution-Share Alike 3.0 Unported license.

Supernovae happen a few times every century in the typical galaxy. The last Supernova seen in our own Milky Way was in 1604 (Kepler's Supernova) and it was visible to the naked eye (even in the daytime!).

Although we understand broadly what causes the different kind of Supernovae, we are still missing some important pieces of the jigsaw. For example, are Type Ia Supernovae really standard candles? Is there more than one way to make a white dwarf explode? Another question concerns a new class of Supernovae which are a hundred times brighter than core-collapse Supernovae. These rare events are known as Superluminous Supernovae (see figure) and only a handful of events have been discovered so far. Their origin remains a mystery.

Watch "Where did we come from?" video in which Neil deGrasse Tyson explains the origins of the heavy elements.

Gaia will revisit each point on the sky about 70 times in its 5 year mission. This provides the perfect discovery machine for large numbers of Supernovae and even a few Gamma Ray Bursts. Gaia is expected to see about 3 Supernovae a day. We will follow-up the explosive events that Gaia discovers and try to uncover some of their mysteries. We may even find completely new kinds of explosive events in the Universe. (Skip to description of "History of Supernova Detections" animation.)

The animation above shows a history of Supernovae explosions as recorded on the IAU Central Bureau for Astronomical Telegrams (CBAT) between 1985 and November 2013. Note the general increase in the Supernova discovery rate over the ~30 year timespan. Also note the impact of dedicated Supernovae searches, e.g. SDSS 2005-2007, giving rise to occasional very high density stripes across the sky. The background image is made from star counts in the UCAC3 catalogue, and is shown in a Galactic coordinate Mollweide projection. (Courtesy of Sergey Koposov, Institute of Astronomy, Cambridge.)