If we could measure stars accurately enough, we would find that ALL stars are variable. For example the Sun changes in brightness by approximately 0.1% during it's 11-year Solar cycle. But there are much more dramatic variations in large numbers of stars, the so-called variable stars. Variable stars include Eclipsing Binaries (when one star passes in front of another and blocks out some or all of its light). Another class are the unstable pulsating giant stars where the star is actually oscillating in size and brightness. And most stars (including our Sun) have spots, and as these rotate into and out of our line of sight, these darker regions can fractionally modulate the brightness we measure (though this typically needs very precise measurements). Some of these classes are even naked-eye variables and are nicely summarised in The Top 12 Naked-Eye Variable Stars Sky & Telescope article.

Some variable stars can undergo very dramatic and sudden changes in brightness, while others even explode completely (e.g. Supernova). Gaia will observe the whole sky an average of 70 times during its 5 year mission. We will search the lightcurves of Gaia stars to look for stars that suddenly change state so that we can alert the rest of the astronomical community. Some example of the kind of objects that we are particularly interested are described here. And of course, we are also looking for events that have never been seen before. 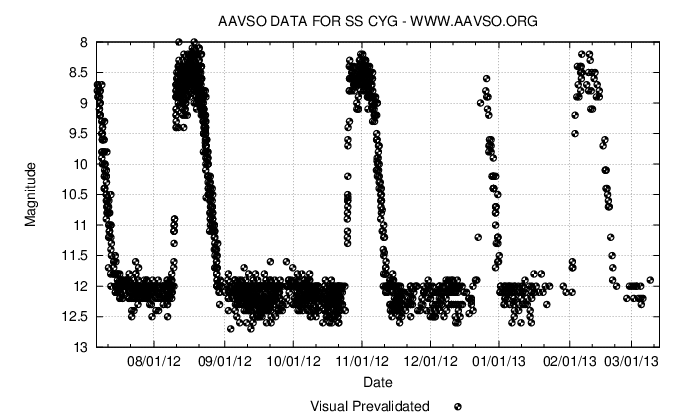 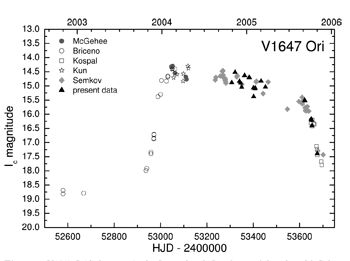 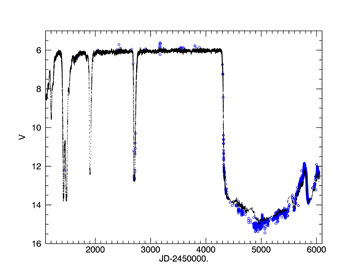 2. The first few million years of a star's life are usually spent embedded in a dense stellar nursery (for example the Trapezium cluster in Orion). Young stars (or protostars) tend to be erratic in brightness, often related to spots on the stars photosphere ('surface') or to clumps of gas and or dust in the disk surrounding the star from which it is feeding. Very rarely, one of these protostars, called FU Orionis stars, can show very sudden increases in luminosity becoming hundreds of times brighter (see Figure). What triggers these outbursts is still a mystery.

3. Not all stars get brighter, some undergo sudden 'dimming' events. One rare class of these are the R Corona Borealis stars (named after the first one discovered). These are giant stars which are deficient in Hydrogen, and extremely rich in Carbon. One proposed mechanism for creating these giants is from the merger of two white dwarf stars (see CVs above). R CrB stars can become thousands of times fainter in a matter of days. It is believed that they are 'belching' out carbon dust which shrouds the star in a dense protective veil.